Movie Review: Does the title “Bad Times at the El Royale” say too much? 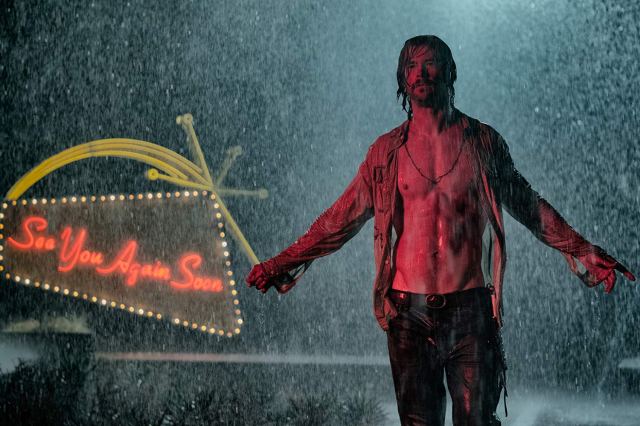 Whatever his accomplishments as a (mostly TV) producer, and his fanboy-adored “Cabin in the Woods,” Drew Goddard’s “Bad Times at the El Royale” plays like the work of a film school Tarantino.

Traveling at an old-man-with-a-walker gait, ponderously telling some parts of its sketch-of-a-story from multiple points of view, it’s an excruciating exercise in self-indulgence, packed with flashbacks and those big speeches/big scenes that draw names like Oscar winner Jeff Bridges, Dakota Johnson and Jon Hamm to its cast. Clever lines, pithy pop culture observations? Not so much.

It adds up to nothing more than two hours and 21 minutes of tedium, with the odd spasm of violence, back-story or musical interlude.

It’s a period piece set in 1969, obsessed with the music of 1962-64, a Theatre of the Absurd homage packing four disparate guests into a former “hidey hole” hotel (actually a motel) where the rich and infamous used to party.

The El Royale, outside of Tahoe, lost its gaming license a year before. But the last employee, the desk clerk/maid/cook (Lewis Pullman) tells its story as if it’s ancient history, this “bi-state” hostelry where guests can stay in either Nevada or California rooms — it pointlessly bestrides the state line.

Bridges plays a priest who shows up with a puzzled look on his face, Cynthia Eriva (“Step”) is a singer with a suspicious nature, and Jon Hamm is the guy with the patter, the luggage and vacuum cleaning sales paraphernalia piled in the lobby, looking for somebody to check them all in.

“Tahoe’s best kept secret” is a veritable ghost motel, and when the clerk blurts out, “This is NOT a place for a priest, Father,” he’s not just talking about the housekeeping, the Automat sandwich machines, the tender-less bar or the out of date jukebox. 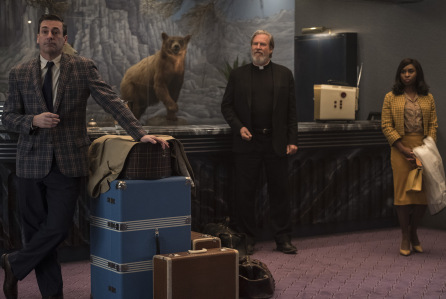 A dialogue-free prologue shows us a robber (Nick Offerman) burying a bag in one of the rooms (all ground level, cars parked at the room –MOTEL). We can wonder about which of the first three guests knows about this for only so long when a “hippy” (Johnson) shows up in a Cougar, not standing for any nosy questions from ANY of them.

They all have secrets, revealed in flashbacks and resolved in violence. The motel/hotel does, too. The rooms were bugged, set up for blackmailing the celebrated, the political and the famous, should that be the owner’s priority.

Goddard breaks his picture into chapters taking their titles from the rooms each patron inhabits — “Room Five,” “Room One,” etc. Clever.

He introduces a hunky cult leader (Chris Hemsworth) and his “family,” letting us see how he rules that world, with sermons and staged “tussles” (brawls).

“Let’s have ourselves an ALLEGORY” Billy Lee (Hemsworth) bellows, prophetically.

Goddard even takes us to Vietnam.

And every so often, Darlene (Erivo) sings, rehearsing in her room, caught in an embarrassing flashback at a botched studio session, coping with a racist business and a racist world any way she can.

Scenes are dragged out in some inept facsimile of “suspense,” performances fail to touch or connect.

Allegory or not, little of this sticks together and none of it sticks to the memory. Don’t get too attached to anybody, don’t try to reason out who should survive, who should have the money, who to root for. Goddard doesn’t make his intentions clear.

Of course, there were people who plumbed deeper meaning out of that silly staged “experiment” “Cabin in the Woods,” and they’re wetting their Underoos over this, too.

Go to any film school in America. While the filmmakers might not be able to hire A-list talent (Bridges took a check for “R.I.P.D.,” Hamm has no big screen career and Johnson’s list of credits with heart and intellectual heft and no nudity is blank), you run into pastiches like this in every graduating class.

They all want to be Tarantino, but lack the wit to carry it off, or the nerve to go as far as he does. Goddard would be right at home among them.

2 Responses to Movie Review: Does the title “Bad Times at the El Royale” say too much?