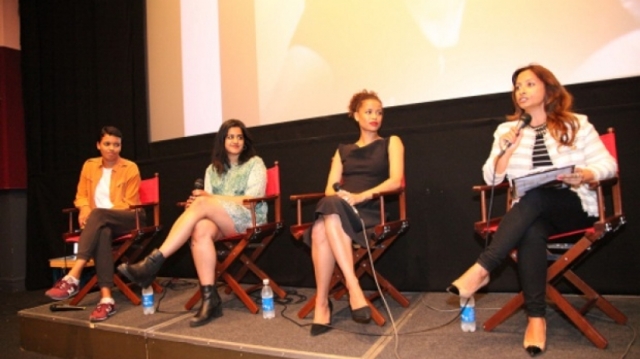 This story in the Times, based on a study by the Center for Study of Women in  Television and Film (note the error in the Times piece about the center’s name, the goobers), got a lot of people’s attention last week.

And I resisted the impulse to pop off about it to give it a little more thought. I mean, sure, the old saying I was taught in Semantics and Polling classes in college, “The terminology of the question determines the terminology of the answer,” comes into play. When a group dedicated to helping women succeed in TV and Film sets out to crunch numbers about female-directed/female starring films getting more harshly-reviewed than male ones, those numbers are going to jibe with that pre-conceived prejudice.

But as my headline notes, that stiletto cuts both ways. It is far easier, I would posit, to argue that women critics — fewer in number — are giving a pass to female-fronted/female-directed projects because of the messy fact that Hollywood still isn’t giving female filmmakers the opportunities that they’re giving male ones, that female-fronted movies from “Carol” to “Bridesmaids” to “Ocean’s 8” are still exceptional — rarer than they should be. So female critics are grading on the curve to make up for an actual shortcoming/injustice.

On the surface, at least, that’s how it looks. I’ve noticed that several times in recent years — pans, overall for “Ghostbusters,” but female critics by and large embraced it. “What’s up with that?” I scornfully said to myself.

The reality is the sample size is too small — for filmmakers and for critics — to make such generalizations. And the only way to rectify that is to go a LOT further than the Tomatometer, Ladies Championing Jobs for Ladies in TV and Film.

We need hard numbers of female filmmakers, which isn’t hard to come up with. They’re still an exotic thing in the cinema. I’ve reviewed a few female-directed films over the past month, and based on my memory of those, their success rate (a good or half-decent film, well-directed enough to note) is about the same as for male filmmakers.

Lots of middling to mediocre movies, and then there was Sydney Freeman’s cute and edgy “Deidra & Laney Rob a Train,” for Netflix. Or Claire Scanlon’s delightful rom com “Set It Up.” For, uh, Netflix. See a pattern here?

That’s two out of let’s say the last eight films directed by women I can recollect this summer.  Not a bad rate. And if you’re making an ad hominem swipe at male critics not cutting female filmmakers a break, there’s Exhibit A for my defense.

But it’s a tiny sample size, and to get at both the gender gap in reviewing and in filmmaking, you and I and San Diego State are going to need a MUCH larger sample from a much broader spectrum.

Why doesn’t San Diego State’s Center for the Study of Women in Television and Film get enrollment numbers at the nation’s film schools, for starters? Poll the top 25 (every college wants its own film school, for some reason), see what their ratio of males to females is.

I’ve judged student film competitions from several films schools in different states where I’ve worked. OVERWHELMINGLY male enrollment was my experience. Is that because the schools are cutting guys a break, or because male students are indulged (pricey tuition) more than female ones by their parents?  Or maybe it’s a testosterone-drenched profession, at least partially driven by a century of perception of the All Powerful Director/Auteur?

Directing is a very butch job.

The way Hollywood has devalued directors in recent years — disposable no-names headline even the biggest franchises — film school is no easy path to either employment or a career behind the camera. But enrollment numbers are a good place to start if you’re tracking down data to prove or disprove bias, Martha Lauzen of the Center for the Study of Women in Film and Television. You can’t do that just by counting Rotten Tomatoes scores for “Ocean’s Eight,” which plainly inspired this half-assed “take.” How Mindy Kaling of you.

Yes, “Ghostbusters” got beaten up by male critics. And “Ocean’s Eight” didn’t get a break. But “Wonder Woman” did. And unlike the first two films, it was actually directed by a woman.  I wasn’t nuts about that one, and having watched Patty Jenkins direct “Monster” here in Orlando, I was not surprised that the Gal Gadot and FX spectacular wasn’t so much “directed” — credit Jenkins with its tone — as produced. That’s what I saw on the set of “Monster,” the soon-to-be-Oscar winning star Charlize Theron and a pushy producer or two ran that set.

Kathryn Bigelow enjoys good reviews for most of her films these days, “Detroit” included. Directors from Mira Nair to Sofia Coppola to Greta Gerwig, Lisa Cholodenko, Miranda July, Sarah Polley, Jodie Foster and on and on have made films that merited good reviews. And they got those good reviews.

I can’t remember ever panning a Nicole Holofcener film, and Nancy Meyer never gets anything other than a fair shake from me (Nora Ephron got the same courtesy) and I dare say most of the males reviewing her works treat her the same way. “Feminine” or not, it either works or it doesn’t. 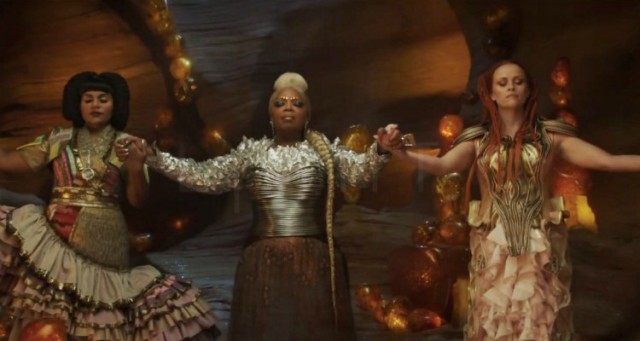 Ava DuVernay made a lousy job of the probably unfilmmable “Wrinkle in Time,” and got called on it. Not all female filmmakers are created equal. Some are Friends of Oprah. Look at her credits and tell me she got entrusted with that expensive picture based on merit and accomplishments.

“Wrinkle” makes my “grade on the curve” point for me. Not every woman reviewing it praised it, but an amusingly disproportionate number did. We could shrug that off to differing sensibilities, narrative/action preferences between men and women. You know, the whole “Women are from Venus, Men are from Mars” thing.

But as the menfolk are being accused here, let’s just lay it out there. A lot of women reviewers packed their readers off to a stillborn, bloated bust of a fantasy. Is that how we build trust in our opinions, ladies? Cutting crap movies some slack because we buy into the Oprah-Ava-Reese-Mindy hype?

That’s unfair and glib of me, as unfair as the “conclusion” the “Center” (one woman, apparently) came to after a little Rotten Tomatoes/Metacritic perusing. When the data sample sizes are small enough, you can leap to any conclusion you like.

Reviewing movies and criticism in general is still something men — gay or straight, mostly white — feel compelled to pursue. Something like 3/4 of the reviewers aggregated on the movie review aggregation sites are male, and overwhelmingly white.

It’s changed a little over the decades I’ve been doing this, but only slowly and only in tiny increments.

That has something to do with background, opportunities, the desire to do something you’re passionate about overruling the need to make the most money in the shortest period of time, as well as “white privilege.” Let’s just say that in this culture, white males are anecdotally given a pass on any impulse to offer an opinion — editorially, politically, in sports and on music, TV and movies.

When I worked for newspapers, the pursuit of diversity was a necessary and yet never-ending struggle. Anybody with the gift of a decent education and the ambition to rise above his or her station would take those traits into a more lucrative field. Journalism thus is more of a calling. A few get rich, a few sell their souls to accomplish that, but most do it for the rush, the ego trip, curiosity, self-righteousness, what have you. Film reviewing is journalism, and it’s the same way.

Getting minority reporters to work in newspapers/websites, etc., spend years in small operations working up to Major Dailies, magazines in the Big Media Markets where TV and book deals lie, is a lot more of a grind than getting a business or law degree and billing your way to happiness. Prestigious journalism degrees can jump you through many of those hoops, just via college. Not all.

But why pursue a chancy/pricey  Ivy League education if low to middling pay journalism work is your goal? The cost-benefits ratio isn’t on your side.

Without that obvious upside, I never saw the thin ranks of minority writers at any paper I worked for change substantially. I didn’t see this as a shortcoming of the company (sometimes, sure) or in the education opportunities to Latin and African American students (sometimes, sure).

But the biggest reason you don’t see enough folks of color in newsrooms is obvious. Where are the Chinese-American, Japanese American, Indian-American reporters? The same place black and Latino reporters dwell — making a living somewhere with a better chance of financial success. Too smart to do it, too educated to waste that on reporting, too common-sense oriented in what their expensive education should give them in return.

By extension, that’s why you don’t see more female critics or critics of color.

To get more female critics, more women have to forgo the English, Art History, Women’s Studies or Latin degrees (analogous, I’d say) and pursue studies in something just as seemingly impractical — film and media criticism.

As the gatekeepers of reviewing, legacy media companies, shrink and shed critics and the web democratizes the platforms and possibilities of gaining an audience, there is no excuse for anybody with the passion and commitment and a computer to not start reviewing.

Get yourself into an online critics organization, maybe one dedicated to female critical voices. Get noticed. It’s easier to do if you’re a minority and regarded as a novelty in the vocation.

But saying there’s a “problem” and pointing to a culprit, when a look in the mirror is in order, is lazy. Ask yourself why more women aren’t setting out to do this, and sticking with it? And shouldn’t those women treat films as gender neutral as we expect the guys to?

For now, I say female critics are cutting female-centric films and female-directed films a break, not grading them as dispassionately as they do other movies. Prove me wrong.

2 Responses to Are female film critics grading female centered films and female filmmakers “on the curve?”