Documentary Review: “Scotty and the Secret History of Hollywood” kisses and tells

Scotty Bowers has lived quite the life. He grew up in rural (later Chicago) Illinois, served in the Marine Corps during the deadliest time in its history — fighting from Guadalcanal across the Pacific.

He just turned 95, and until very recently, he was clambering onto his roof, climbing ladders to trim trees and driving around, hauling his vast collection of memorabilia between his various houses and storage facilities that he rents in Los Angeles.

How’d he make his living? Well, right after the war, for over a decade, he pumped gas at the most popular service station in Hollywood, a Richfield at 5777 Hollywood Blvd. And he kept a corps of his fellow Marine vets (and a woman, here and there) employed “turning tricks” for the rich and Hollywood famous.

Bowers even wrote a book about it, “Full Service,” naming names and good-naturedly recounting the predilections of icons of The Golden Age of Hollywood.

“You couldn’t believe how busy I was,” he jokes in “Scotty and the Secret History of Hollywood,” the new documentary about his life and loves, that book and his place within Hollywood Babylon.

And many won’t — “believe” it, that is. “Maybe this is all a big secret to some square who lives in Illinois,” he cracks to filmmaker Matt Tyrnauer at one point. “It is hard to believe, unless you were there.”

As gay figures from novelist Gore Vidal to celebrated photographer Cecil Beaton vouched for his bonafides, as his surviving “tricks” show off autographed books and notes from the likes of Charles Laughton, as old index cards with the names and numbers of some of the (not famous) “regulars,” roll out, Scotty Bowers seems perfectly credible.

Add to that his coarse, crude (Marine, remember?) and casual attitude about all this “forbidden” sex he was facilitating, back when careers and indeed a person’s very liberty could be taken away by same-sex scandal, and he’s a star witness for just how gay Hollywood and the world have been, all along. We “squares” just didn’t know it.

Oh, the rumors were out there in the open — Rock Hudson, Pleshette and McCambridge, Garbo and Dietrich, Grant and Scott (“Roommates can be lovers too, you know.”). Books always popped up, right after this or that major figure died and could not sue. “Pathography,” such biographies were labeled.

Now, all these years later, with the Golden Age all but completely died out, Bowers lays it all out there. And a lot of that laying out there is repeated for the film. 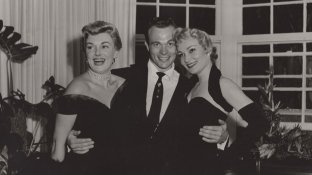 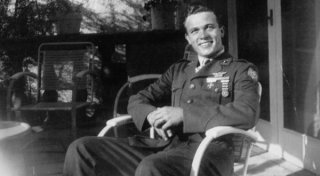 A favorite phrase of Scotty’s — “I never took any money” to make all these arrangements. Not buying that. But he did take money for his own sexual favors, from Bette Davis and Grant and so many others — $20 at a time, for much of his “working” life.

Another favored phrase? “Word got around.” As in, he starts at the Richfield, Walter Pidgeon picks him up on the first day, George Cukor, the director and gay impresario gets word. Next thing you know, legions of “pretty boys” are being lined up for nude Sunday swim parties as Casa de Cukor, all arranged by Scotty Bowers.

Granted, nobody famous shows up in any of those. Cameras were a lot less convenient and commonplace in the Age of Illegal Homosexuality. But Scotty tells their tales, again leaving out anybody who might still be alive. Not that any are.

A PMs he celebrates the publication of his book (in 2012), does birthday events and dabbles in bar-tending (his cover-job, once he left the service station) in the film, there’s something darker beneath the adorable re-connections with former “tricks” — old, old men hugging, kissing and calling each other “baby.”

Scotty’s a hoarder, a certifiable one. And a miser.

Second wife Lois, a lounge singer, just shrugs it off and does a la-di-dah, I don’t want to know about any of THAT…

The film’s several parties — with penis-shaped cakes delivered by semi-nude waiters, reminiscing about “Big D— Strauss” and the sexual organs of this trick or that one — are crass, at best. Commonplace in gay America, but common.

His “Nothing wrong with that, any of it” about his own underage sexual history or those gay men who like it like that starts to grate.

The fact that he was a major provider of testimonials and “research” for Alfred Kinsey makes you wonder, if not about the sexual peccadillos documented in his books (People were into then what they’re into now, by and large), at least at Kinsey’s statistics.

His contributions to “My Buddy,” a gay nude photo book about “foxhole buddies” and homosexuality in the military of World War II is both touching and challenging. That would make another movie, more controversial than this one.

But as our understanding of sexuality and its “fluid” nature among much of the population changes, “Scotty and the Secret History of Hollywood” serves a larger purpose. By telling these tales now, he’s blunting the shock of the pace of changing mores and acceptance of the different.

It didn’t happen overnight. Hollywood sexcapades today are no different from what they were back then.

And Hollywood is now, as it was then, merely a reflection of what’s in the culture, not a bellwether for anything “new” and “shocking.”

You’ve been protected from “the truth” long enough, Scotty Bowers seems to say. What’s the big deal? Get used to it.