Photographer, writer, sketch-artist, production designer, charter member of the “Bright Young Things” and a “dandy” is the most pointed sense of the word, Cecil Beaton lived and worked and cut a wide and gorgeous swath across 20th century high culture like no one else.

The author of “The Book of Beauty,” the high-born (but not high enough to suit him) Brit set and re-set Western culture’s aesthetics, its standards of beauty, and shaped his own fantasy world in fashion photos and documentary (news) photography, in stage design and on the screen.

“After you’ve started for the end of the rainbow,” he once wrote in his diary, “you can’t very well turn back.”

And so he didn’t. Over a lifetime that saw him photographing and ingratiating himself with everyone from Cambridge’s smart set to Hollywood’s elite, British royalty and then Marilyn and The Rolling Stones, he made himself famous. With Oscars for designing “Gigi” and “My Fair Lady,” he demonstrated “the Beaton touch” and earned screen immortality as well.

“Love, Cecil” remembers a not-quite-forgotten figure who exercised enormous influence in his day, a vain, stylish bon vivant who may not have invented “the selfie,” but who certainly perfected it. Yes, filmmaker Lisa Immordino Vreeland had archival TV interviews with Beaton, even access to his first on-screen essay on “American beauty” (from 1929, and he insisted there was no such thing as “American” beauty). She had Beaton’s many published diaries, and Rupert Everett (as Beaton) reading from them.

Mostly though, she had self-portraits to choose from — thousands of the damned things — preening, made-up, perfectly coiffed, perfectly lit and beautifully composed shots of the man’s idealized image of himself.

It’s funny to hear Beaton himself, or assorted biographers, apologists and others twist and contort themselves pooh pooh the “vain” label that hugged Beaton like a form-fitting suit, from birth to death, thanks to franky narcissistic portraits of himself and the peers who came to be known as “The Bright Young Things.” He makes shape-shifting artist/poseur/provocateur David Bowie look like a shrinking violet.

The film is as adoring as those self-portraits.

Filmmaker Vreeland, granddaughter-in-law- of Vogue empress and Beaton intimate Diana Vreeland, rounded up legions of those who met, knew or were influenced by Beaton’s chic tastes, eye for color and social climbing — designers like Blahnik and Mizrahi, current British “Vogue” editor Hamish Bowles among them.

She gives Truman Capote one last chance to remark on the man’s infamous bitchiness, evident at an early age and present even in his later years. He loved (and had an affair with) Garbo, loathed Evelyn Waugh and Noel Coward (jealousy) and his put-down of Katherine Hepburn, one of many he photographed over the decades, “a dried-up old shoe,” still burns.

Beaton was fired from every American magazine and studio that had employed him when he squeezed an anti-Semitic illustration into Jewish-run “Vogue,” redeemed himself with his first royal portraits in the U.K. where anti-Semitism was taken more lightly, and finally made his mark on the war effort with a haunting, iconic “Life Magazine” cover of a little girl, in the hospital, recovering from injuries suffered during a 1940 air raid.

He covered most every theater of World War II, “Love, Cecil” reports. His shots of battlefields and the gear of war have an artistic touch, his many portraits of sailors, infantry and airmen prepping to fight have a decided homoerotic touch.

And after the war, the talented fashion sketch artist and photographer got his shot at designing for the theater, and then film. His design of “My Fair Lady,” immortalizing a fantasy version of upper class England just before World War I, is his masterpiece. 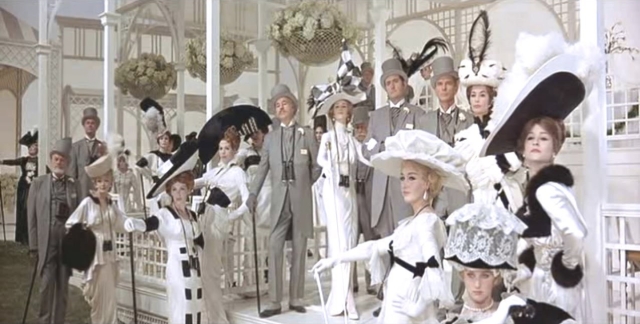 He was better known when I got around to reading and reviewing a biography of him during the ’90s, but even then he was only recognized by the cognoscenti of his former realms — fashion, design and mostly gay fans of vintage gossip.  A tireless self-promoter and somewhat closeted (it was illegal then) “homosexualist” who was never happy at love, he is still not completely forgotten, but more remote from cultural memory today, almost 40 years after his death.

But Vreeland’s film, wallowing in the Beaton vision of beauty via his images, his art and his screen work, does a marvelous service in reclaiming this dandy’s dandy/designer’s designer and iconic photographer from obscurity.

The culture will never see the likes of Cecil Beaton again, a Renaissance Man with an unfailing eye for composition and color, though his record for narcissistic self-portraiture is challenged every day by the stars of Instagram.