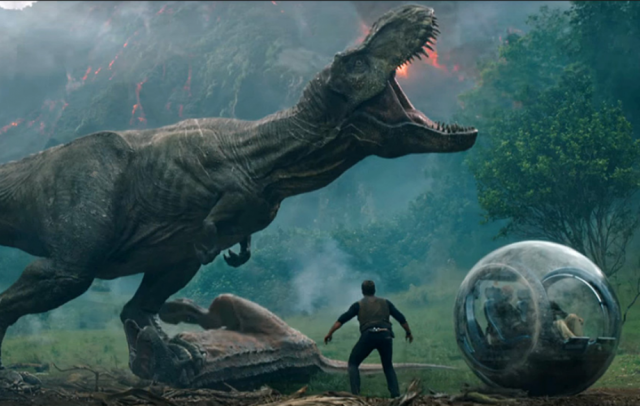 Sure, give them points for shoehorning Jeff Goldblum, the quirky, cautionary Dr. Malcolm, into a couple of scenes warning a clueless Congress about the consequences of letting once-extinct dinosaurs live on, despite the repeated failures of the “Jurassic Park” business model.

That’s just to set up the next dinosaur dinner buffet, which is all any of these movies amount to. Dinosaurs live! Humans congratulate each other for resurrecting them. Dinosaurs get hungry. Humans dine out on the folly of man.

The failed theme park reboot of “Jurassic Park” has left the Isla Nublar facility a ruin still filled with living, fighting and breeding dinosaurs. And now the island’s volcano is erupting. Bryce Dallas Howard‘s park publicist has turned animal rights activist, running the Dinosaurs Protection Group. They’ve just gotten the bad news — Congress won’t rescue the surviving dinosaurs — when the mysterious partner of the late founder of the park (James Cromwell) throws out a lifeline — another island refuge she can move them to.

The billionaire’s foundation chief  (Rafe Spall) says there’s just one catch. OK, two. She has to do this on the down low. And she has to drag along her ex (Chris Pratt), the expert who raised and tamed the last velociraptor still alive there. It takes drinking and begging to get Owen back on her team.

“If I don’t make it back,” he tells her, tenderly, “remember, you’re the one who made me come.”

With punk veterinarian Zia (Danielle Pineda) and girly-voiced shrieking tech nerd stereotype Franklin (Justice Smith), they’ll help the “great white hunter” (Ted Levine) and his rough customers hunting crew track down and capture the dinosaurs before the volcano swallows the island, the ruined park and the last vestiges of the Jimmy Buffett’s Margaritaville there.

You’ve read that plot description, so you pretty much know what’s going to come. Michael Crichton’s long dead and gone, so Universal is flushing good money after bad on writers Derek Connolly and Colin Treverrow, who shamelessly collect checks for cutting and pasting action beats, situations and even storyboards from all the earlier films into a file and insisting it’s an “original screenplay.”

A novel underwater opening is about all they contribute. It’s easy for any viewer to guess, just by framing and camera placement, which of “Jurassic Park’s Greatest Bites” is coming next, from which side of the frame, from which dinosaur, and with which dramatic dinosaur pose at its climax.

Again and again I found myself stifling a “Didn’t see THAT coming,” which I so wanted to shout out loud.

Pratt’s act is wearing thin, which is saying more than his ability to do his own stunts. All these cut-aways as he hangs from this or clambers over that. The editing doesn’t hide it,  man. Sit-ups. Personal trainers.

But Howard does a dandy job of “selling” the frights here. Together with the latest billionaire offspring to be imperiled by the park (Isabella Sermon), Howard convinces us that whatever non profit her character is running, these toothy monsters sniffing around for redheaded flesh freak her the hell out. I appreciate a good, realistic reaction to horrific beyond belief. Still, when Ms. Howard’s the best thing in the picture, what’s that tell you?

The direction is pedestrian, with only a couple of scenes having any novelty to their set-up — a race against a pyroclastic (eruption) flow, a desperate trapped-underwater moment. My crack about “storyboards” earlier falls on J.A. Bayona, a fine director (“The Orphanage,” “The Impossible”) who just took a paycheck and cribbed set-ups and pay-offs from the earlier films for his dino-bites here.

The villains are generic oligarchs and those who serve the oligarch market (Toby Jones with dentures), standard issue for Trump era thrillers. The cat and mouse games with the stalking raptors have merely changed locales, from a lab to a mansion out of the Harry Potter movies.

I was one of the few naysayers when the franchise was rebooted with “Jurassic World,” yet even with the bar set lower for expectations on this one, I found it “Transformers” boring, a summer movie that however much it earns, fails to justify its existence.

At least there’s Goldblum’s Dr. Malcolm there to speak for those of us who think these movies smell to high heavens.

Credits:Directed by, script by . A Universal  release.