Movie Review: The relentless cruelty of “Pin Cushion” sticks with you

Posted on June 6, 2018 by rogerinorlando 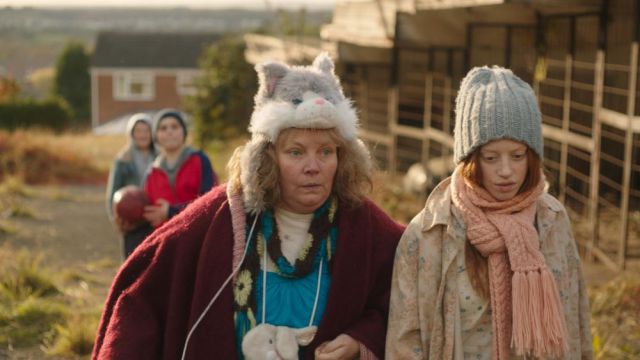 Deborah Haywood’s “Pin Cushion” is an easy film to laud, a hard one to warm up to.

It’s about the psychic toll of bullying, as both a fresh experience, new to the young, and what a lifetime of it can do to you.

You can tell by looking at her that Lyn has dealt with it forever. The hump on her back singled her out, pretty much from birth. She dresses oddly, isn’t quite immune to the stares she gets or the insults callous children have never been taught to hurl her way in her corner of Little Britain.

She collects tchotkes and we can’t tell if she’s ever had a job or a beau.

One thing we do know about Lyn, played with a dazed, almost punch-drunk empathy by Joanna Scanlan of “Notes on a Scandal,” is that she had sex — at least once. She dotes on her wide-eyed daughter, Iona (Lily Newmark). But Iona is entering her middle teens, and if asked, will say her Mum’s “an air hostess” if she can get away with it. She’s ashamed.

And when the mean girls at school seem to take an interest in naive, plain Iona, that’s only going to get worse.

Daz (Loris Scarpa) may be just that sort of boy. But he seems nice enough, and Iona is smitten.

Mean girls in the movies always travel in packs of three, and we know by conditioning what cruel Stacie, Keeley and might-be-reachable Chelsea could be up to with Iona. As desperate as the new girl is to connect, make friends, as desperate as her mother is for her to have that, neither of them absorbs the warning signs or keeps her guard up.

Hayward piles on the indignities, the graffiti-shaming, insults and rank hostility Lyn and eventually Iona must deal with. It can be heartbreaking, even as you hope for some “Carrie” moment of comeuppance.

Young Newmark, of TV’s “Emerald City,” captures the neediness a kid that age carries around with her. But Scanlan shows how the bullied never outgrow that, and she lets us see Lyn stagger under the blows delivered by rude neighbors, one a mean girl who never outgrew that meanness.

Because most of us know they don’t.

The relentless cruelty here grows harder and harder to endure because Hayward never lets Lyn, or us, off the hook. Lyn crumbles, and we crumble with her, hoping against hope she will stand up for herself and make that a teachable moment for a daughter who otherwise faces a future almost as bleak as her own.

But the movie’s object lesson, though I hesitate to call it that, connects more with the current zeitgeist where bullying and its origins are treated as something society can identify and by mere appeal to a bully’s conscience, eliminate.

Since time immemorial, there has been but one proven, moral and righteous way to deal with bullies. “A punch in the nose” is all they understand, the famed columnist Mike Royko put it in a less namby-pamby era. Bullies don’t “learn” feelings and respect.

The empathy-impaired and cruel have to be confronted, faced down. Failing that, they go right on being bullies until they’re stopped. If they aren’t, they end up owning you or, in one extreme case, the White House.

Credits:Written and directed by Deborah Haywood. A Cleopatra  release.