Movie Review: Bring the kids, but don’t forget the hankies, for “Zoo” 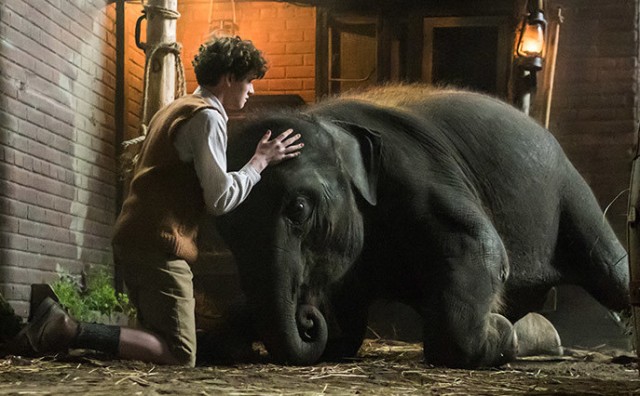 History seems to be the last refuge of films that challenge children with the ugly realities of life. Cinema for kids has long erred on the side of rubbing the sharp edges off to protect delicate youth and its sensibilities.

In other words, try to remake “Old Yeller” or “The Yearling” today, you’d get hashtagged out of polite, nurturing society.

But good children’s films have an easy acceptance of the bittersweet, an acknowledgement that even a story’s sad side teaches empathy, that there are times when it’s OK to cry at what’s happening on the screen.

“Zoo” is a warm, sentimental Irish period piece about some kids, an elephant and World War II. Its lessons include not judging people by appearances, that growing up requires passing tests of character and sometimes following your own morality and not what authority demands is how you do the right thing.

And in a time of war, death is never far removed from your life.

Tom (Art Parkinson) is a young Belfast teen who loves nothing more than helping Dad (Damian O’Hare), a vet at Bellevue Zoological Gardens. That’s how he’s the first kid in town to see the zoo’s newly-arrived baby elephant, despite the protestations of cranky security guard Charlie (Toby Jones).

But it’s 1941, Britain is hard-pressed, fighting the Germans and Italians pretty much on its own. Dad is called up.

“I’ll be coming home in no time” isn’t reassuring. And the new “apprentice vet” (Stephen Hagan) doesn’t like having the kid around.

Tom is bullied at school, but he hasn’t given up on the bully’s apprentice, Pete (Ian O’Reilly). And Tom is touched when his poorest classmate Jane (Emily Flain) sticks up for him. She’s ashamed of her drunken father and embarrassed by her clothes, but the least the lad can do is take her to her first-ever picture show.

It’s April of 1941, the darkest stretch of the war, and shipping and armaments industry Belfast is on the Germans’ target list. Air raids like the ones that have been pounding London for months would be devastating. Kids are trained in how to use gas masks, and in a real jaw-dropping moment, we see them herded into a smoke-filled van for “practice.”

But of all things, the authorities are worried about what might happen if “dangerous” zoo animals were to get out after a bombing.

The order goes out. “Shoot anything dangerous in the zoo.” Tom is inconsolable and powerless to stop it. But maybe, with a little help from some new friends, the elephant can be snatched and brought to safety. 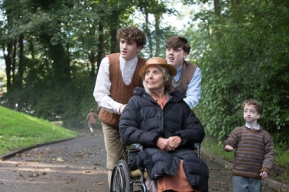 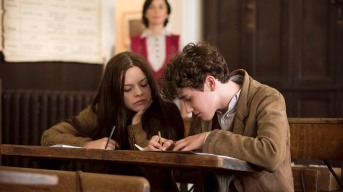 The caper itself is a thinly-developed affair. “Zoo” is more about Tom’s “team.” He needs bully Pete, because he’s “strong.” Turns out, Pete is a bundle of fears and phobias, but Tom can make him brave. If not Tom, then Mickey (James Stockdale), Pete’s put-upon brother (he’s a dwarf) can buck them up.

Jane has inner resources the boys can only imagine.

And then there’s the neighborhood lady all the kids think is a witch, what with her dark shawl, testy demeanor and all the weird noises emanating from her house. Old Lady Austin, given a grumpy, mournful touch by Penelope Wilton of “Downton Abbey,” could be their secret weapon. Those noises in her house? They come from ferrets and parrots, bunnies and hedgehogs, snakes and who knows what all.

Mrs. Austin loves animals beyond measure, beyond reason, beyond the capacity of her packed, shuttered house and courtyard. One more couldn’t hurt, right? Two tons of fun and all that.

For all the kids and critters in this Colin McIvor (“Cup Cake”) film, there’s a gravitas and pallor to the proceedings. Cute moments don’t lighten the burden of confronting bullies and unreasonable, unbending authority, or the “Keep Calm and Carry On” stoicism of everyone’s awareness that “There’s a War On.”

Whatever happens with the caper, we know that tragedy is all around them and that it’s sure to intrude on this little blood pact the kids (and Mrs. Austin) make to save the elephant. When it comes, remember, there’s no dishonor in tears and remember to bring enough tissues for everybody.

The story here is “true,” in the broadest sense, which is why the film opens with that wriggle-room “Inspired by” real events credit. The Belfast air raids of 1941 were among the deadliest of the war, on the Allied side. Yes, animals were killed to “protect” the populace from their escaping the zoo, and yes, there was an “Elephant Angel” who sought to protect a pachyderm.

The true story required some embellishment to make it into a kids’ film, and child-film length means that many relationships introduced get shortchanged.

But “Zoo” is a sweet and occasionally sad tale, told with sensitivity and performed with great charm by all concerned.