Domhnall Gleeson — Could ginger hair and good genes make him a movie star? 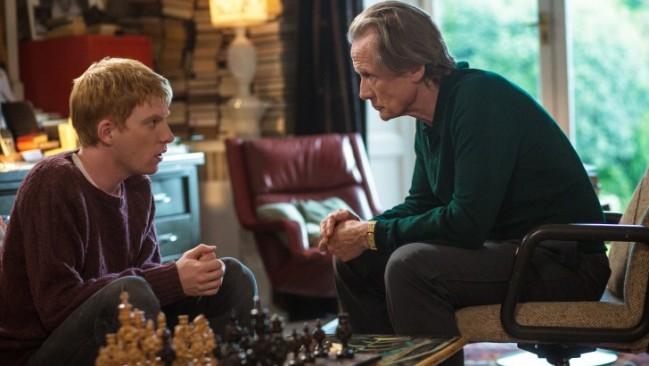 Will “About Time” turn Domhnall Gleeson into a movie star?
At 30, the redheaded son of the great Irish actor Brendan Gleeson, brother of Brian (“Snow White and the Huntsman”) seems on the cusp of it, parked front and center in a Richard “Four Weddings and a Funeral” Curtis romantic comedy.
In the film, in which he plays a young man who uses his inherited ability to travel backward to some specific point in his life for a “do over,” Gleeson courts, re-courts and wins Rachel McAdams and earned “agreeably quirky leading man” (The Hollywood Reporter) notices in doing it.
“It’s the first time I’ve been front and center in a film that was bigger than something tiny and filmed and shown in Ireland,” Gleeson says from Australia, where he appeared at the film’s premiere (it opens in the U.S. Nov. 8). A a ginger-haired veteran of the “Harry Potter” franchise — he was a Weasley sibling, naturally — Gleeson hasn’t had the sort of a career or life that begs for its own “do overs.”
“I’m sure I’ll get up to plenty later on that I’ll regret at a later date,” he jokes. “The message of the film is that if you’re living your life properly, you shouldn’t need to do anything over. Hopefully, you’ve paid attention to things as they were happening. Pay attention. When life surrounds you with beautiful things, realize it. Be there for it.
“Despite that message, the lovely reality of it all is that every day, you probably do ten things you wish you hadn’t done. That’s where the comedy lies.”
Following in his father’s footsteps, Gleeson has worked with the great Irish playwright turned screenwriter-director Martin McDonagh. The younger Gleeson picked up a Tony nomination for his work in “The Lieutenant of Inishmore,” had a bit part in “Six Shooter,” the Oscar winning short film that put his dad and Martin McDonagh on the film industry’s radar, and has a role in the next Gleeson-McDonagh team-up,”Calvary,” which Martin’s brother John Michael McDonagh (“The Guard”) wrote and directed. The Irish McDonaghs (“In Bruges,” “Seven Psychopaths”) aren’t shy about tying their fates to the Gleesons. And that offers Domhnall (the Gaelic version of “Donald”) more chances to pair up with Pop.
“Acting with my dad is one of the great pleasures of my work,” he says. “Any day you get to go on set and spend time with a friend, a family member and one of your acting heroes is a pretty good day. I’m lucky to have had plenty of those.”
That helped him connect with his “About Time” dad, played by Bill Nighy, at his most sage and sanguine.
“Bill makes you cherish every moment on the set. You’re paying attention to the greatness of every day in your life because that’s what the movie is about…Playing father and son can be a very stressful thing, because it’s meant to be a great, positive father-son relationship. Those are rare, in film, because drama comes from the stress in such a relationship. You’ve got a lot to live up. My relationship with my dad is so special. Bill felt, in an instant, somebody you could turn to for advice, somebody you could have a drink with. You feel you’ve been made better just for being around him.”
He’s all bubbly, positive energy about the film and what it might mean to his career. Yes, there are “Hugh Grantisms” (The Guardian newspaper) in Gleeson’s “About Time” performance. But that’s a given, considering the track record of screenwriter and sometimes writer-director Curtis (“Love Actually,” “Notting Hill”). But there is great chemistry with Rachel McAdams.
“That’s all on her. Can you think of a film where she didn’t have great chemistry with the leading man? I can’t.”
And hit or miss, he hopes to take the life lessons, on and off screen, that “About Time” gave him into his acting future and into his heart.
“If you’re not learning from people — my dad, Bill, Rachel, Richard — you’re wasting your time.”

(Roger Moore’s review of “About Time” is here)