Movie Review: “Nothing Left to Fear” 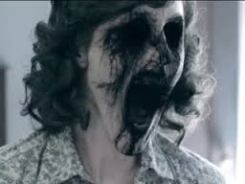 Beware the horror movie that lists its “special effects” team too high in the credits. It’s a dead giveaway. “This is what we spent our money on” and “This is what we’re proudest of.”
But hats off to Spectral Motion and effects maestro Mike Elizalde. The ghosts in “Nothing Left to Fear” are the only things to fear in this pedestrian spook fest.
They could have pitched this as a “reunion” of the on-and-offscreen paramours of the late TV show “Men in Trees” — Anne Heche and James Tupper. But who remembers that?

They play a preacher and his wife who move their family — two sassy, profane preacher’s daughters, Becky and Mary (Rebekah Brandes and Jennifer Stone) and a younger son (Carter Cabassa) — to Small Town, U.S.A., for a fresh start. Preacher Dan (Tupper) was recruited by Preacher Kingsman (Clancy Brown) to take over his flock upon retirement.
Kingsman seems a tad young to retire, which isn’t the first clue that all is not as peaceful and pastoral as it seems here. The hunky farmhand Noah (Ethan Peck) rattles the newcomers by slaughtering a sheep and letting it bleed out in front of the girls.
“Ewwww.”
And there’s all this forbidding music underneath even their welcome to the parsonage, where the congregation pitches in to help the Bramfords unpack.
But Dan was “called by a Higher Power” to this town of church socials, county fairs, romantic walks along the railroad tracks (Noah and Becky) and little old ladies who bake cakes with Satanic teeth in every slice. You bite down on that cake, and evil things are set in motion.
“Has the choice been made?” Kingsman wants to know. Yup.
“Nothing Left to Fear” doesn’t preserve its sense of mystery and only once or twice — at the very end — discovers any sense of urgency to the proceedings. Director Anthony Leonardi III is more interested in the slow, small-town courtship between a 20something hunk in a truck and hormonal city teen (Brandes) and lingering shots of the rebellious and fetching two preacher’s daughters, slowing the picture to a snail’s pace in between Becky’s nightmares and visions. She senses something is going on amid the tired plot points and beyond-banal dialogue.
Cue Spectral Motion and the effects team. Faces contort into long-jawed horrors that Edvard Munch would be proud to call his own, eyes hollow out into sockets and black bile streaks up bodies as they’re possessed. By something.
Nobody seems that upset by what is going on, even the preacher and family who find themselves, in the third act, under ritualistic, supernatural assault. And if they’re not that scared, why would we be?
But at least the effects are cool.