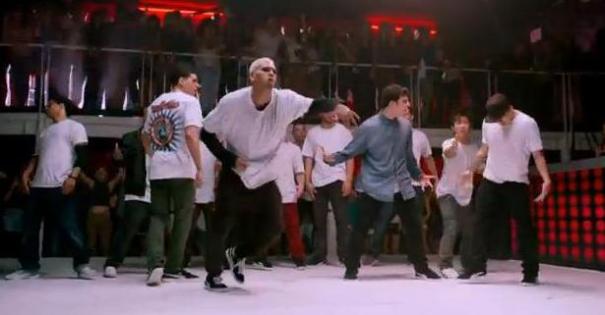 Dance battle movies — “Step Up” and its ilk — have become the musicals of their generation. They may be formulaic in the extreme, generic in their romances and be peopled by character “types.” But they’re athletic extravaganzas celebrating great skill and the art of B-Boys and B-Girls.
They may wear the veneer of “street” and “edgy,” but parents appreciate how harmless they are.
“Battle of the Year 3D” touches on that, how the rest of the world has embraced B-Boy culture, but how they’re no longer perceived as cutting edge or “cool” in the U.S.
That worries the Sean Combs-like impresario, Dante (Laz Alonso).
“How long before hip hop isn’t cool?”
He’s got to protect his music, dance and fashion empire by putting American B-Boys back on top. He hires an old dance buddy, W.B. (for “Wonder Bread”), now a grieving, alcoholic ex-basketball coach (Josh Holloway of “Lost”). W.B. has to get himself up to speed on the current state of dance, then recruit and coach a “dream team” of the best of America’s best to take on the rest of the world, which has passed America by and long dominated the annual B-Boy Olympics known as “BOTY,” the Battle of the Year.
That team consists of assorted arrogant, chip on their shoulder show-offs, because that’s what it takes to succeed at this. Actual star dancers such as Do Knock and Flipz are mixed in with others, including singer Chris Brown.
And helping coach out is Jewish hip hop authority “Franklyn with a Y,” played by Josh Peck. He doesn’t dance himself. He’s Jewish, he explains.
“My people were not exactly ‘chosen’ to be B-Boys,” he cracks. But there are Jewish B-Boys. And combat vet B-Boys and gay B-Boys, all of whom try out for the team. They fight, they insult one another, they learn from a choreographer (Caity Lotz), they bond and you know the rest.
The director of the definitive documentary on the worldwide phenomenon “Planet B-Boy” co-wrote and directed this, and immodestly has characters watch that film and sing its praises. Very B-Boy of him.
Holloway cannot even hint at a real dance past, so the movie fakes that by having his coach run his guys through drills (in split screen sequences).
Peck, once of TV’s “Drake & Josh,” onetime star of “The Wackness, has a small supporting role but is given top billing. In this case, that means his every scene includes overly made-up and coiffed close-ups, all teen magazine posters in the making. It’s laughable.
But the singer and tabloid darling Chris Brown more than holds his own with this crew, apparently not even needing a dance double. The dance scenes — especially those involving teams from Germany, France and Korea — take the B-Boy moves to the next level, blending gymnastics and dance in some pretty spectacular ways.
And there plenty of easy, undemanding laughs, the best lines coming from Peck’s assistant coach.
“You look like a gazelle out there,” he praises his boss, “a gazelle with arthritis.”
Which, while it doesn’t describe the movie, does hit this genre right in the bulls eye. But then, the beauty of “Step Up” and all its tired imitators is that the audience they’re shooting for has no idea that there have been twenty or thirty movies exactly like this one that came before it.

2 Responses to Movie Review: “Battle of the Year 3D”