Movie Review: “Paris-Manhattan” finds fresh laughs in the wit and wisdom of Woody

Paris-Manhattan” is an amusing little nothing of a movie built around the wit and wisdom of Woody Allen. First-time writer-director Sophie Lellouche has taken bon mots from Allen’s movies and used them to create nothing less than a philosophy of life for her heroine,
“Why is life worth living?… I would say… Groucho Marx, to name one thing…the 2nd movement of the Jupiter Symphony… Swedish movies, naturally.”
Alice (Alice Togliani), whose name was the title of a 1990 Woody film and who is a dead ringer for Julie Hagerty of “A Midsummer Night’s Sex Comedy,” has been obsessed with the “handsome” director, “the one who makes me laugh,” since college. She’s never married, works as a pharmacist with her worrywart father and hands out DVDs of Woody’s films in lieu of medicine, on occasion.
“Everything You Wanted to Know About Sex But Were Afraid to Ask” is a particular favorite. But she fobs off “Take the Money and Run” and “Bullets Over Broadway” on a thief trying to rob the place.
She’s seemingly content with her Cole Porter, her Woody collection (a giant Allen photo hangs on her apartment wall) until her family shoves her into contact with two men who could change that. Vincent (Yannick Soulier) is handsome, rakish, and sophisticated, the one with the best shot. Victor (Patrick Bruel) is one more like Allen himself — frumpy, older, running an alarms system business, and immune to the charms of Mr. Allen.
He has “a clean record,” he tells her. “Never seen a Woody Allen film.” After she insults his intelligence and then feels bad about it, she runs off to pitch a little more woo with Vincent, who seems more her speed.
But Victor is deep, and a keen observer. He’s the one who picks up on her brother-in-law’s infidelity, her mother’s drinking. And her father? “He wears his madness on his face, like you.”
Lellouche was shooting for something like “Play it Again, Sam,” the Allen play and film (He didn’t direct the movie) in which he plays a lonely critic who takes romantic advice from the late Humphrey Bogart. Alice has imaginary dialogues with Allen, taking counsel from this movie line or that one. But Lellouche loses track of this device for a long stretch before picking it up, with a flourish, for the finale.
Alice’s use of the movies and Victor’s droll dismissal of them, the quirky world of her pharmacy and its busybody customers and her family — so lethally sized up by Victor — delivers more laugh-out-loud moments than a film this short and slight should. “Paris-Manhattan,” in French with subtitles — save for the Allenisms — gets at something of the French fixation on Allen, and packs in a light, lovely Razor-scooter ride through Paris by a pretty woman in a lovely red dress.
Woody himself would certainly approve. 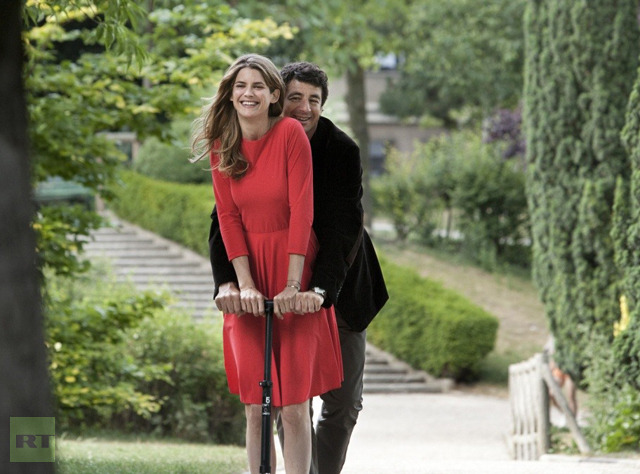