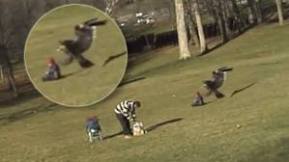 We used to hear apocryphal stories like this up in Alaska — usually involving lap dogs.

An eagle, in town for the salmon runs (I lived in Kodiak, salmon runs and round the clock fish canneries were a draw), swooped down and grabbed this Yorkie or Dachshund or whatever.

So the story about a similar snatching in Canada, with video, got my attention. And millions of others.

It didn’t happen. It was faked. The Canadian film students who did it were told to come up with a video that could garner 100,000 Youtube hits. And they did. With a hoax. Funny.

Here’s how they did it. Digital tricker is just part of the story.