Movie Review: “Umrika” sadly reminds one of the America the rest of the world used to see

“Umrika” is a dark commentary on the varied reasons for immigration and its human cost wrapped in a sunny, traditional “coming to America” package. This Sundance Audience award winner is a fascinating film to get around to in post-Trump America, a time when that warm, well-worn “Anything is possible if we can just get to America” movie narrative has been utterly shattered, from within and from without.

Prashant Nair set his “illusions of immigration” parable in a very different India — the pre-boom 1980s. That India is evaporating. And within a couple of years of this film’s release, the America of “I lift my lamp beside the golden door” was closed, unmasked and utterly disgraced in the eyes of the rest of the world.

Rajan (Prateik Babbar) is the son of a picture-postcard village in the north of India, where chickens roost on the thatched roofs and goats wander the fields. He will leave the genteel poverty of this world and go to “Umrika,” as they say there — “America.”

His mother (Smita Tambe) is almost inconsolable. But she, her husband (Pramod Pathak) and younger son, Ramakant (Shubham More) are consoled by the promise that he’ll send money home, and that he’ll write.

And so he does. Within months, the letters begin to arrive as our narrator, the adult Ramakant (Suraj Sharma) tells us. Rajan sends magazine photos of the sights, and regales them all with the wonders in the U.S.

“Over here, even the bathrooms are bigger than Lalu’s hut!”

The postman, played by Rajahs Tailang, reads the letters aloud to the entire, mostly-illiterate village. Presents — a “piggy bank” — arrive, as well. And this goes on for years. Ramakant is inspired to go to school with his pal Lalu, and learn to read.

Electricity comes to Jitvapur, a family member dies, and then the letters stop. Ramakant learns the truth behind the letters, but not the whole truth. He must go, first to Dehli, and then to Umrika, to figure out what has happened.

And in the teeming, corrupt city, the young man, accompanied by his childhood pal Lalu (Tony Revolori of “The Grand Budapest Hotel”), doggedly follows Rajan’s trail, which points to all sorts of unhappy or unsavory conclusions as to what happened to him. 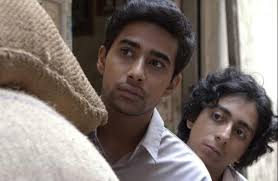 “Umrika” is a dramedy of intrigues, moral compromises and suspense interrupted by lovely dashes of whimsy, the gossip, legends and delusions 1980s working class/working poor Indians harbored about the mythic land across the sea.

“I’ve heard in Umrika, there’s this thing called ‘calories,'” one wag declares (in Hindi with English subtitles). “Makes them all big as balloons.”

The family back home sees pictures of a cookout Rajan allegedly went to, and just KNOW those hot dogs everybody is eating could not mean he’s eating MEAT. They must be roasted “American carrots!”

And when the traveling tent cinema shows “Indiana Jones and the Temple of Doom,” notions of who the actual “hero” of the picture is are entirely different, as the audience shouting at the screen and pelting Harrison Ford’s image with food reveals.

But those lighter touches are but distractions from the larger drama of Rama’s scheming to get to the man who helped smuggle his brother abroad, to get information from another guy from their village who lives in the city and may know something, and of Rama’s disillusionment about his brother, their family, their village, their country and the one Rajan wanted to go to — Umrika.

It’s a film of genuine surprises and tiny delights, even though it bogs down and loses its urgency when the quest that drives it falls into the background. There are hints of “Il Postino” and “The Third Man” in its mashup of plots.

The performances are generally solid, if a little generic. Revolori stands out and makes the sharpest impression.

But Nair — he went on to make “Tryst with Destiny” after this — has conjured up a warm, yet illusory and brittle memory of a more naive time, when Indians and Americans could live perfectly happy, seeing only the innocent gloss of their current lives and the glorious, gilded world that awaited them, if only they could make it to Umrika.