Today’s entrée from our “Around the World with Netflix” buffet is a polished jewel from Chile that gives Jorge Garcia the rare shot at a starring role.

Garcia is still best known for being on TV’s “Lost.” In the years since, he’s turned up in bit parts, too often as little more than a sight gag in, say, an Adam Sandler “comedy.” Because he’s huge.

“Nobody Knows I’m Here (Nadie Sber que Estoy Aqui)” gives Garcia the chance to play a soulful, fragile lead, a morbidly obese man hiding out from a world that rejected him.

Memo lives on an island near Llanquihue, in lush southern Chile. His uncle (Luis Gnecco) may encourage him to talk (he virtually never does) or urge him to “go to town” (in Spanish with English subtitles) to socialize a little.

Memo avoids even those rare visitors who come to buy the sheepskins that they make their living from.

And Memo only cranks up their skiff to slip into empty houses, wandering through them when those unknowing neighbors aren’t at home. He’ll never be caught, he assures the uncle, because he’s as fleet as “a gazelle.”

Something happened to Memo in his childhood. We start getting hints of that early on. Back then he was a cherub (Lukas Vergara) with an angelic voice. Back then he had a shot at a recording career in Miami. But a producer and Memo’s mercenary dad (Alejandro Goic) made a deal of the Milli Vanilli variety. Memo never got over it.

The first hint that he might is the arrival of Marta (Millaray Lobos), an inquisitive, friendly replacement filling in for the man who normally drops off their mail and supplies. Shy Memo picks his spot, and finally starts answering her many questions.

A clue as to what troubles him is his enraged reaction to a new autobiography by the pretty poseur who got to use his voice to become a teen Latin pop idol in the ’80s. He forces himself to sing to a fleeing Marta to reveal the depths of his anguish.

“Nobody Knows I’m Here” was the hit that launched his — or rather Angelo’s — career. 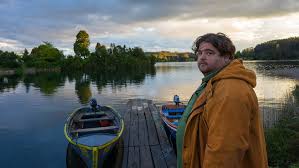 Writer director Gaspar Antillo peels the cover off this mystery with the patience of an art cinema veteran, limiting his dramatic “incidents” to amplify their impact.

The scenic setting is contrasted with the grim circumstances Memo chooses to live in — a tumbledown old house, a barn where he slaughters sheep.

Through it all, Garcia shines as a man trapped by his past, reliving it in the way it should have turned out, broken at the chance that was snatched away from him. Memo sews a stage costume for himself. And perhaps his skulking through other people’s homes is a way of sampling the “normal” life he never had.

Lobos and her character Marta have a plucky, open-hearted Sally Hawkins vibe about them, and Lobos even looks a little like the British Oscar winner.

The many melodramatic turns the story takes break the cryptic code Antillo, a first-time feature director, sets up.

But “Nobody Knows I’m Here” proves Garcia, too, could have a better career that’s been offered. He’s much more than a sight gag or set dressing in an Adam Sandler comedy.

Credits: Written and directed by Gaspar Antillo. A Netflix release.