Movie Review: The New York Times covers up a famine, but “Mr. Jones” reports the truth

“Mr. Jones” is a story of three journalists.

One persistently and somewhat naively stumbled into a genocidal scandal of world-shaking proportions.

One tried to cover it up from the pages of one of the world’s great newspapers, and became one of the most infamous apologists in the history of journalism.

And a third turned into a novelist who laid bare the crimes of a system that was as base as human nature, and just as murderous when the characters conveying that aren’t humans at all, but animals on a farm.

Director Agnieska Holland returns to the era of her first great triumph (“Europa Europa”), events leading up to World War II, for this account of Holomodor— the Stalin/Soviet-made famine that killed millions in Ukraine in 1932-33. It’s also a straightforward biography of the reporter most widely credited with exposing it to the outside world, government Foreign Affairs Advisor turned journalist Gareth Jones.

James Norton of “Little Women” stars as Jones, capturing the naive idealism and moral absolutism of a man who had just scored an interview with Adolf Hitler, a literary coup for himself but something of a nuisance to his boss, former prime minister David Lloyd George (Kenneth Cranham), who with his Liberal Party aristocratic peers, refused to see Germany as a renewed threat.

It’s early 1933, just after the Reichstag Fire. Jones — newly laid-off — figures Britain will need another alliance with Russia (now the Soviet Union) if German moves to re-arm and attack its neighbors are to be resisted. But there’s something about “The Soviet Miracle” and “Stalin’s spending spree” that the Cambridge-educated Jones doesn’t get.

“How is Stalin paying for it all?”

He books passage to the East.

“I hear Moscow is beautiful this time of year.” “March?!”

And once there, he is confronted with two facts. Reporters are “confined” to Moscow, shadowed by minders, men one journalist (Vanessa Kirby) labels “Big Brother.” The other fact? Everyone there seems to accept Soviet propaganda and press releases at face value, because that’s what Pulitzer Prize-winner and Soviet enthusiast Walter Duranty of The New York Times does.

Duranty is played by Peter Sarsgaard at his most unctuous and oily. He is wired in, a veritable Soviet lobbying presence in the American press as he acts as go-between for their government and that of the United States.

But the suspicious death of a friend has Jones on his guard. He longs to get out, see “Stalin’s Gold,” the grain raised in the “black earth” of Ukraine where Jones’s mother was born. Might one of Duranty’s junior reporters, Ada (Kirby) help?

Not much, it turns out. But Jones, carrying that “Where’s the money coming from?” question in his mind, connives his way into making such a trip. And what he finds there is one of the great tragedies of the last century. 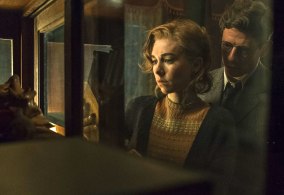 Holland and screenwriter Andrea Chalupa frame the story within the letter writing and then, novel typing of left-leaning journalist Eric Blair, who turned out Depression Era enthusiasm for the “new way” Soviet Russia is doing things. At first.

The clever touches in this script capture Jones’s inexperience in journalism. He rubs Ada Brooks the wrong way by asking her questions no competitive reporter wants to answer.

Jones was young, and his idealism clashes with the “agenda” he sees Duranty and his lackeys pushing. He takes the “follow the facts where they lead” credo to the hilt.

Holland contrasts the opulence with which assorted commissars travel, work (plush offices) and gorge themselves with the world Jones escapes his Ukraine minder to see — snowy whites, colorless greys, bread lines that turn to bread brawls as starving people fight for the scraps that aren’t “sent to Moscow,” a married couple, frozen in their beds after starving.

And don’t ask the feral children he sees everywhere what they’re using for meat.

Those children sing nursery rhymes to the famine, recite (in Russian with English subtitles) anti-Stalin limericks (“Stalin sits on his throne, playing the violin. He looks down with a frown on our bread-giving country…”

This film was 22 minutes longer when it played film festivals, and it can feel truncated when the third act rolls around. Jones didn’t actually “break” the story, but he was the first to sign his name to “I saw famine” stories. So there’s more to this than we see here.

But Norton makes a sturdy, inexperienced but curious hero, a man every bit as idealistic about “the truth” and Sarsgaard’s Duranty is all about “a movement bigger than any one person,” his “agenda.”

“Bitter Harvest” was a pretty good 2016 movie about the details, life within one village during The Holomodor. Holland, Chalupa and “Mr. Jones” show us the view from the outside, the struggle to get the story out.

And in its loveliest touch, they show us the long memory of literature, when the right journalist and critic takes on the nom de plume “Orwell,” and tells the tale of what happens in a world where “All animals are equal, but some animals are more equal than others.”