Movie Review: “Jesus Shows you the Way to the Highway”

Labeling “Jesus Shows You the Way to the Highway” as “absurdist” doesn’t do it justice, although “absurd” figures into every let-your-freak-flag-fly frame.

It’s got dialogue, lots and lots of loopy and looped (the voices sound disembodied, recorded and added later) banter.

“Stop sodomizing me, Agent! Try to find a way to wake up!”

Not every actor is impersonating somebody else, but there’s a pretty good Werner Herzog impression in here, somewhere.

“The Soviet Union is planning something BIG. Try to find out before you wither and die. Good luck, and…sorry!”

It’s got heroes and villains, from Mister Sophistication and the cowled caped killer, Batfro, to Jiminy Cricket.

No, not THAT Jiminy Cricket.

And effects? Hell, Jiminy here is a hologram “assistant” secret agents summon up during their virtual reality missions into Soviet cyberspace via a CIA program called “Psychobook.”

Yes, there’s a Jesus here, or is he “You! You cheap copy of Jesus!” This Jesus carries a cross that doubles as a heavy metal boombox.

The hero is a hunchbacked dwarf (Daniel Tadesse) CIA agent trapped in cyberspace, who only wants to get back to his plus-sized wife (Gerda-Annette Allikas) before she moves on and starts cheating with his CIA partner (Agustín Mateo) and rides off into the sunset in his ’68 Triumph Spitfire.

They’re fighting a cyber war in the year 2043 (TV ads for “The New Chevrolet” show a 1957 Impala), and this war takes them from one bizarre setting to another, borrowing action beats and locations (faked, mostly) from Bond films like “The Man with The Golden Gun.”

Any human being who’s ever seen and heard a WWII POW movie knows how to pronounce “Commandant.” Not anybody here, not when the “Co-MMAN-dant” is Estonian (Lauri Lagle). 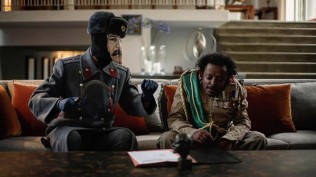 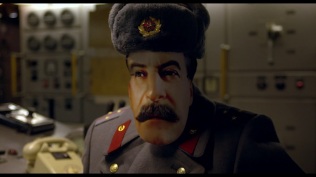 And all of it’s the product of the fervid mind of madman writer-director Miguel Llansó (“Crumbs”).

No, it doesn’t make sense, and no — not every shabby, cheap DIY touch is cute.

But for laughs, it’s hard to go far astray when “Jesus Shows You the Way to the Highway.”