Documentary Review: Remembering an air base and the bomber crews who flew from there — “Return to Hardwick” 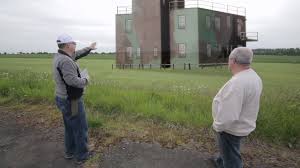 In World War II, “the BIG one,” as veterans of it used to remind us, no plain was more ungainly than “The Flying Boxcar,” the B-24 “Liberator” bomber.
They flew in Europe and in Asia and took part in some of the epic air raids of the war in Europe. And no bomber group flew more missions in B-24s than The 93rd Bombardment Group, part of the “Mighty” Eighth Air Force.
“Return to Hardwick” is a remembrance of that group, built on the memories of those veterans still living when filmmaker Michael Sellers started this documentary, and on their descendants.
That’s the fresh angle to this standard-issue “What did you do in the war?” doc, the children, grandchildren and other family members curious about “Where grandpa fought,” “How my uncle died,” “What Dad’s base when he was in the service looked like,” and even “How mom met dad.”

Hardwick was one of the scores of airbases dotting the English countryside, most of them long abandoned, but places that tie a lot of American servicemembers to the landmark event in their lives. Hardwick, near Norfolk in East Anglia, is mostly a potato farm, now. But some of its “Nissen” huts (similar to American Quonset huts) are still there. And there’s a museum. Veterans and their descendants come back there as part of European vacations, and the locals keep up the place as tribute to America’s involvement in the fight to save the world from fascism.
Using archival footage, still photos on base and family photos, letters and diary entries (read by “Band of Brothers” actor Michael Cudlitz) and interviews with survivors of the group’s missions, “Return to Harwick” is a filmed memorial to sacrifice, duty and men (and women) who signed up “for the adventure” of leaving the provinces, farms and small towns of America for Europe and its all-consuming conflict.
Less successfully, the film uses digital animation to recreate planes on the flight line, taxiing to the runway.But  the colorful names on the still photos of the planes — Hell’s Wench, Tupelo Lass, Bear Down — photos of the then-young men and one Red Cross woman who served there, take us back.
Summarizing the raids — Berlin, Ploesti — is more than just repeating the standard Army Air Force description of the “Second Front” the fleets of British and American bombers opened by bombing German military installations, manufacturing, mining, transportation and oil refining. The infamous Ploesti B-24 raid is dissected in some detail.
“What’s the gas load?” was the first thing crew members wanted to know before each mission. That told them how far they’d be flying.
A movie this narrow in focus has a hint of “We made this for the families/video sold at a museum” about it, which “Return to Hardwick: The 93rd Bombardment Group” never overcomes. If you’ve ever visited the Eighth Air Force Museum on I-95 in north Georgia, you recognize how memories of that war and those who fought it are fading, and that “enthusiasts” alone might keep the history alive, but aren’t exactly creating generations of new WWII AAF buffs. (I’ve been the lone visitor walking through there a couple of times.).

And no, it’s not likely the children seen here, dragged along for these family expeditions, will repeat the journey their parents insist they pass along as a family tradition.

But any as the last World War II veterans pass from the scene, and movies about that war become rarer and rarer, a documentary like this reminds us of “The Good War,” the sacrifices it took to fight it, but also the horizon-broadening adventure of it all for a generation of Americans who got their first taste of the big, wide world in khaki.