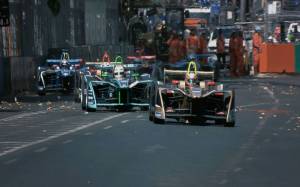 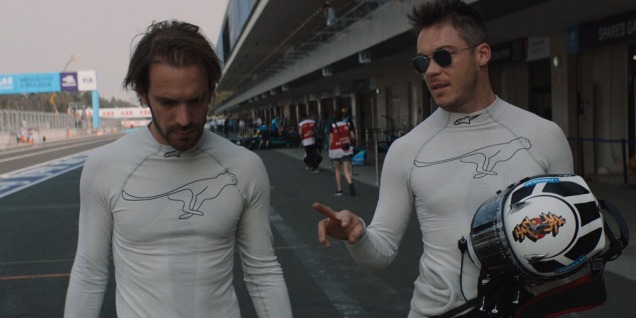 The roar of the engines is akin to the whine of a vacuum cleaner — not ear-piercing, but high-pitched.

And the only smoke you see on the streets of the cities where Formula E races are run — Zurich to Marrakesh, New York to Mexico City and Hong Kong — are clouds of tire burn, the result of instant torque and high speeds, and that wafting from the cigar of series founder Alejandro Agag.

Every race begins with a brilliant bit of announcer branding, “And we go GREEN in Berlin” or Monaco or Santiago Chile or Punta del Este (Uruguay).

Agag, the silky-smooth Spanish politician-turned-entrepreneur, is a “racing guy” who kept running into sponsor problems with the global racing series Formula One.

“It is not environmentally friendly,” he heard, over and over again. “The planet is dying.” He decided to start his own series, open-wheel racing in electric cars. It’d be “the best of both worlds,” speed, competition between teams and car companies and dashing, colorful drivers driving not just the pin-your-ears-back-fast cars, but the electric car revolution.

While F-1, NASCAR and others might pay lip service to “innovation,” Formula E would utterly depend on it. The cars couldn’t even complete an hour long race in the streets of Paris or London or Miami when the twelve races/ten teams/20 drivers series started in 2014.

But by 2019, that “range anxiety,” still the biggest drawback to electric car sales worldwide, would be run over. A series designed around “regenerative braking” and electrical power conservation through smart (fast) driving would break that hour at speed barrier.

Stevens and Venville’s flip and edgy film also gets us in the faces and in the helmets of the drivers, many of them Formula One washouts or wannabes.

André Lotterer, a three-time LeMans (sports car racing) winner, crashes into a wall at Hong Kong, the first race of the 2018 season and his first turn in F-E.

The instant-acceleration thing, the fact that “the sound of the engine is usually a speed reference when you’re going into a corner,” his teammate and friend Jean-Éric Vergne explains, is missing. This car is a whole different kind of racing beast.

The back-stories of the drivers are as colorful as the racers are model-pretty. There’s the son of a famous racer (Nelson Piquet Jr.) chased out of F-1 in a scandal, the “F-1 racing drivers are posh, Sam Bird’s not” working class Brit, the “arrogant, condescending” Lucas Di Grassi.

The helmet-mikes — which should be an unfiltered, uncensored MUST in telecasts — capture the testy complaints, the cursing, the intensity of the rivalry.

Agag and assorted journalists cheerlead the series, which is just as elite (only 20 drivers, just like F-1) and just as competitive at the manufacturing level.

Jaguar had no electric car experience before diving in, and now sells them. Audi is shown failing in race after race on the steep learning curve that ePrix provide.

Leonardo DiCaprio and Orlando Bloom show up for races, with environmental advocate DiCaprio getting a personal walking tour through the garages at Marrakesh, Morocco, asking Agag some of the movie’s most pointed questions.

One BIG question nobody asks — Renault, Audi, Mahindra (India), Nio (China) and Jaguar are represented. Is Detroit about to miss the boat again?

The journalists covering the series marvel at how quickly it seems to be catching on, filling the stands surrounding the courses in city after city. The city-street courses are difficult, often the same ones used by Formula One’s city races.

And the whole affair, from its “glycerine” generator (to charge all the batteries) to the World Wildlife Fund sponsor stickers, feels fresh, righteous and Next Gen fun, auto-racing for people who don’t want to back fossil fuels and the reactionary politics of a Lucas Oil or environmental damage of a BP.

A little more skepticism, a few tougher questions might have been in order. Where DID the fellow in a “I Love Fossil Fuels” t-shirt assault Agag in a bar? Was it New York?

“And We Go Green” is still a thoroughly entertaining look at the future of racing, a future that’s poised to collide with the present any minute now.