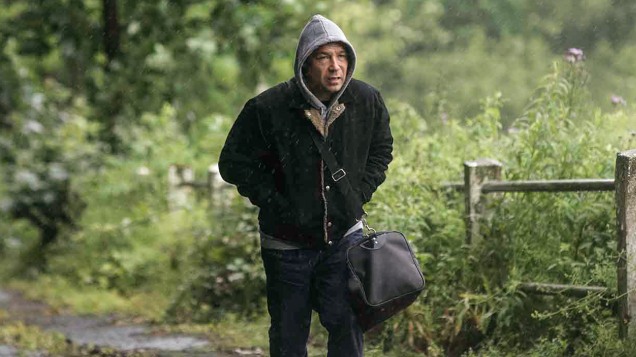 “The Virtues” is a stylish, visually-arresting four-part British series about adults haunted by the traumas of their youth. Unblinking in its its detail, compellingly-acted, it immerses you in working-class life in Britain and Northern Ireland, life with a healthy dose of dysfunction. And then it grabs you by the throat for a finale that is shocking, all the more so in that it feels somewhat inevitable.

Joseph McCarthy, given a heart-on-his-sleeve lilt by veteran character actor Stephen Graham (“Tinker, Tailor, Soldier Spy”), is a sad-faced house painter in Sheffield when we meet him. He’s pushing 40, divorced, and he chokes up when he has dinner with the ex (Juliet Ellis), her new husband and his little boy Sean.

They’re above to move to Australia with the nine-year-old. The boy can’t understand — “Why can’t you come?” Joseph can barely hold back the tears as he tries to comfort him.

We’ve barely adjusted to “he’s just emotionally available” when more layers of Joseph’s lonely life peel away. He knocks back a couple down’t pub. Makes new friends, and downs many, many more. The handheld camera captures his boozy stagger, the lens simulating the “Guinness goggles” he sees the evening through.

Next thing we know, Joseph’s tapped out his bank account, bought a ferry ticket and headed “home.” He has a problem with alcohol, “issues” that his emotions give away. And there’s nothing for it but to pass out in front his the home of the Ballybraigh/County Louth home of his sister Anna (Helen Behan).

She’s married with three kids. And his “Can’t you remember me?” doesn’t answer her “How’d you know me?” They haven’t seen each other since they were separated after the death of their parents 30 years before.

What follows is a tearful but fraught reunion, with more layers of their past peeled away, each finding the other’s deep-seated hurt in a search for healing, closure, something to end this ache that keeps life from making sense.

Anna’s the truly shocked one. She moved on with her life because “I thought you were dead.” She’s got a marriage, kids, responsibilities. She’s got to be a rock.

Because Joseph is just the latest truckload of “hot mess” dumped at her doorstep. Her sister-in-law, Dinah (Niamh Algar) is a 30ish blonde trainwreck we meet as the family watches her manhandled by her “fiance” through the front window. Nobody intervenes. “Wait,” her brother, Anna’s husband (Frank Laverty) counsels. “Wait.”

Sure enough, Dinah punches the guy square in the jaw. Then a second time. Third punch, she lays him out. Whatever else she’s on about, Dinah’s not to be trifled with.

Director and co-writer Shane Meadows made his mark on film and TV with “This is England,” his raw, nervy dramas — first a film, then three sequel TV series — about skinhead teens in the ’80s “growing up,” after a fashion, into the ’90s.

These were “kitchen sink dramas,” an intimate, unsentimental British genre invention of the ’60s, given a brutish, violent edge. “The Virtues,” which features a couple of actors from that film and those TV shows, is of a piece with them.

It’s a slow-building mini-series of artful, briefly-glimpsed, home movie-quality flashbacks. We get tiny hints of what’s happened to these hurting people. We can guess the rest.

Stretching the story out over three and a half hours lets the series flesh out family life, hint at Ireland’s dark orphaned secrets and the great weight that burdens Joseph and that fires Dinah’s fury.

Anna’s struggle to be supportive and keep control over these impulsive dangers to her happy home is tested in the most Irish terms imaginable.

And the difference between British and Irish barmen is glimpsed, in handling unruly drunks and in the pride of pouring the perfect pint of Guinness.

“The color’a the first, you’d tink the POPE was comin’!”

This is gripping TV with a harrowing story and a vivid sense of place, a “kitchen sink” portrait of lives and struggles in a land where getting the “color” of a beer-pour right may not matter to a drunk, but it does to the man pouring it.