Streamable? In Old Vietnam, consider the lot of “The Third Wife”

“The Third Wife” is a Vietnamese period piece of “Raise the Red Lantern” variety.

First-time feature writer-director Ash Mayfair creates a lush, intimate character study in cultural mores centered on a 14 year-old girl, May, who steps into adulthood through an arranged marriage into a wealthy family.

It’s a rural life May (Nguyen Phuong Tra My), “The Third Wife” of Master Hung (Long Le Vu), settles into. The clothes may be silk, and there is comfort and plenty on this farm, run by servants and hired hands. But in this blinkered world, life, death, sex and competition to produce an heir are ripe ingredients for melodrama.

Not that Mayfair ever lapses into that. May is taken is as a “sister” to Ha (Nu Yên-Khê Tran ) and Xuan (Maya) in Hung’s house. But they treat her as more of a daughter, too young to know the ways of the world without them explaining things to her.

She has more in common with the older wives’ young daughters, whose hair she combs and whom she helps look after.

Mistress Xuan, Auntie Lao (Nhu Quynh Nguyen) whispers, “is not the real lady of the house” because she hasn’t given her husband a son.

The older wife Ha has. Son (Nguyen Thanh Tam) may be of marrying age, but is high strung and caught up in love-lust with somebody else under their own roof.

We eavesdrop on May’s seduction by her gentle-enough (all things considered) husband, hear her “fake it until you experience it” sexual pleasure lecture from her “sisters” and watch her spy on the other sex going on in the house, in the woods outside.

Her pregnancy becomes a form of prayerful competition with Xuan. 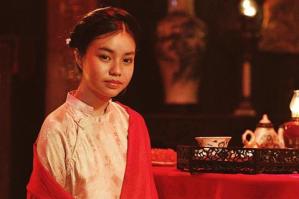 It’s in its everyday life detail, “The Third Wife” most closely resembles the great Chinese period pieces that plainly inspired it. Chickens are butchered and cooked, laundry is hung out and a dying animal’s pain is eased — mostly by servants — as the generally pampered wives teach May to “let a servant do it.”

But those servant/wife lines blur in May’s mind, and ours, when we see women’s value and lack of rights in determining their own future. What to do about an attraction to someone not her husband? Does that have a future?

Some are going to be instantly repelled by the idea of a 14 year-old married off to a polygamous older man. The film’s sexuality is mainly delivered as “instruction” for what unworldly May observes and is told.

“In the end,” the old patriarch philosophizes, “what are we but shadows in the dust of Buddha?”

It’s a different time, simpler and yet harder — something reinforced by the fate of girls even younger than May facing a similar fate.

“The Third Wife” lacks the Technicolor saturated hues of the great Zhang Yimou Chinese period pieces it imitates — “Ju Dou,” Red Sorghum” and “To Live” among them. It lacks the emotional, dramatic punch of those stories as well.

Mayfair presents us with a more passive pastoral drama, meticulously-detailed and lovely, but lacking the payoff, conflict and fireworks that would make it something extraordinary.

The fact that she’s already made another version of this same tale in black and white (“Between Shadow and Soul”) as a follow-up to “The Third Wife” suggests she realizes she pulled some of her punches, this time around.