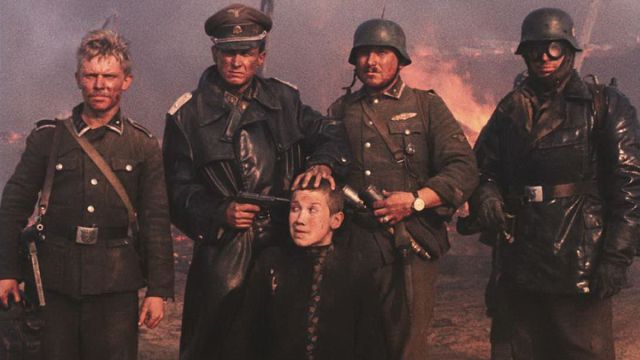 The newly-reissued “Come and See” is a crash course in Soviet cinema history.

Here it is, from Eisenstein until the Iron Curtain parted (briefly), a 1985 summary of Soviet acting, directing, technique and the obsessions of the culture, all in one sweeping epic.

It’s shot in old Academy aspect ratio, features actors staring straight at the camera, grim reality blended with romantic idealism in a movie repressed and controversial at the time because it dared to puncture the official State myth about the common heroism of Soviet resistance to the Nazi invaders.

Set in Belarus in 1943 as the tide of the war is turning, it’s about a boy of about 14 (Aleksey Kravchenko) who revels in playing war games with a younger friend, digging in the abandoned trenches for treasure from the abandoned defensive positions there.

Then he digs up a rifle. That’s his cue to join the partisans, still fighting the Nazis on this fringe of the front lines.

“Think of yourself son,” she cries, when she means “Think of US.” She has a few farm animals and twin little girls to cope with — in a war zone. She needs help and even the unlikely protection of her little man. “Have you no HEART?”

Apparently he doesn’t. He’s got the recruiters at the door, ready to take him away. Her cries fall on deaf ears, his partisan comrades barely bother reassuring her — “We’ll keep him warm.” They take the family cow, and a turkey. And they’re off to the forests.

Flyora finds himself in a tougher, rougher version of the partisans we saw in the Jewish resistance drama “Defiance.” Their leader (Liubomiras Laucevicius) reminds the veterans, and indoctrinates “the new recruit” as to what is expected — a reckless, patriotic disregard for you own safety — and what they’re up against, “total war” a fight to the death against an enemy bent on extermination.

This isn’t “playing war.” Flyora has to give up his boots to a more experienced fighter and finds himself left behind with the camp as the company-sized force marches off. It’s just him and nurses, including the teenage one (Olga Mironova) whose heart the commander just broke.

German paratroops and an accompanying air raid has Flyora leading Glasha to his old village because he knows “the perfect place to hide” (in Russian, with English subtitles).

Bombs chase them into the swamp, machine gun fire splinters the trees all around. There’s barely time for a rainy day reverie before they get to the village and Flyora takes her to his house where he insists they eat the meal left on the table.

“They’re not around,” he says of his family and the villagers. Glasha figures it out long before she distracts him to prevent Flyora seeing the pile of bodies behind the barn.

His mother was right. And this is but the beginning of his unhappy odyssey through a war zone, taking on mentors (Vladas Bagdonas), barely surviving every miscalculation, meeting the enemy in the flesh.

Stylistically, the images are grey, muddy and realistic in the extreme. Did director Elem Klimov (he did a well-regarded 1981 “Rasputin”) use “live fire” to get the bombing/machine-gunning effects?

The voices sound looped (dubbed in off-set), common in much of European cinema but generally abandoned by in the rest of Europe by the late 1960s.  And the acting is Noh Theater-broad, tending towards over-emotive declarative speeches. 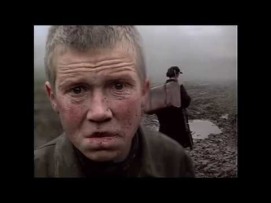 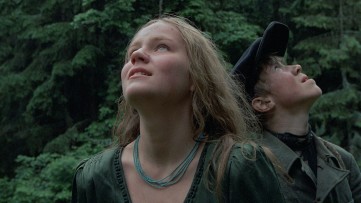 Visually, “Come and See” still has a whiff of “State of the Soviet Art” in its gloomy, over-saturated colors and analog effects.

But even if the acting and sound make it dated, they don’t blunt the provocative anti-war message Klimov and his crew were getting across. “The Great Patriotic War” was Stalin’s last lie. Heroic, fatalistic partisans preyed on everyone to stay alive, and were encouraged to do that by The State.

Helpless civilians struggling just to keep themselves alive and their elderly parents or their children safe long enough to reach adulthood were held in contempt.

And there’s nothing romantic about “total war” — losing it, or winning it.