Posted on February 18, 2020 by rogerinorlando 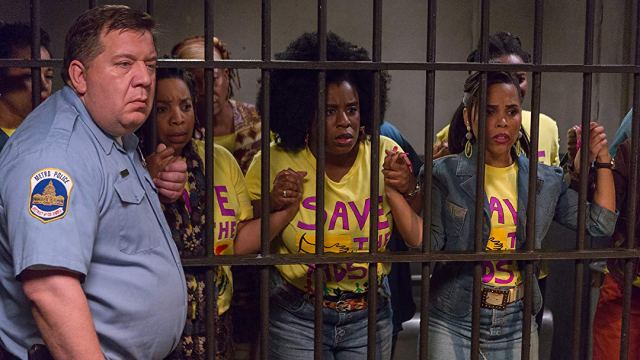 “Miss Virginia” is a thinly-scripted, flatly-directed feel-good movie about mothers organizing to do better for their children than Washington, D.C.’s school system.

“Inspired by a true story,” it recounts the way a working class Washington mother figures out that the schools there aren’t starving for cash and that their symbolic Congressional representation only has the power to stand in the way of change.

It’s a soft and squishy picture built on a soft and squishy performance of the title character by Uzo Aduba of “Orange is the New Black.” She has to carry this film, but her decision to play her overwhelmed single mom struggling to do rescue her teen son passively — not raising her voice, saving her lose-her-cool moments for the third act — never gives this movie a chance.

Miss Virginia’s son James (Niles Fitch) is a distracted, artsy 15 year-old who cuts class with the local thugs, and when he’s in class he just inattentively doodles. Mom doesn’t have a clue until the principal warns her.

She sees the classroom environment, teachers past the point of caring, punks beating up the “smart” kids on principle, as the reason James is failing. So the call-center operator takes on a second job cleaning her Congresswoman’s (Aunjanue Ellis) offices.

Virginia loves her Congresswoman. Until she sees how she operates, who she answers to and how she manipulates her constituents. Showing the representative a study that details the staggering amounts D.C. pays per student for failing schools and failing students is no way to get on her good side.

And taking the matter up with the flaky, entrenched Midwestern Congressman (Matthew Modine, wild-haired, whiskey-sipping and whimsical) who authored that “reactionary” study seems like a non-starter, too. 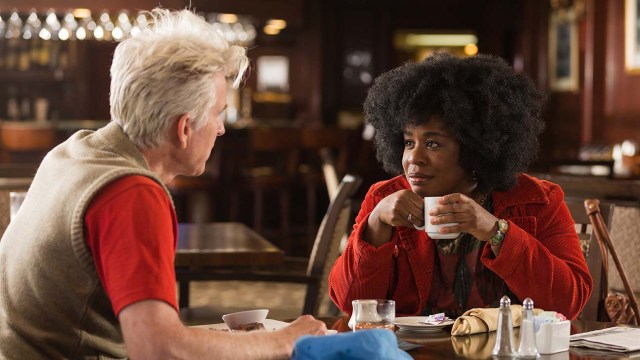 But eventually, they team up and a “movement” to create private school scholarships for the District’s kids begins. Petitions, public meetings, protests (and arrests) follow, as James and his running mates dabble in drug dealing for “cool kicks (sneakers).” That’s what finally  gets Virginia’s dander up.

“Selling your SOUL for clown shoes!” does it.

Unfortunately, that’s too little, too late for the character and the movie. The problem is as obvious as Aduba’s every scene with Modine, Ellis, with Vanessa Williams (as a chat show hostess) or with Amirah Vann, playing a neighborhood ally and organizer.

“This a movement, honey. It don’t stop just because you caught the vapors!”

They all take over their scenes with her, overwhelming the star with acting sparkle and simple charisma. Abuda is a talented actress, but her limited range and dull acting choices turn “Miss Virginia,” the movie and the character, into a shrinking violet.