Netflixable? Loyalties are as murky as the plot on the “Fronteras”

Posted on February 15, 2020 by rogerinorlando 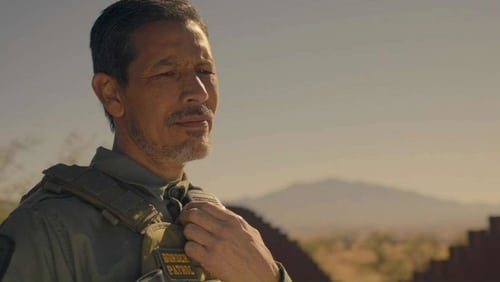 “Fronteras” is a stunningly stupid, talky, meandering Border Patrol thriller set in Arizona, a movie that sets itself up as a war of wills between a righteous Mexican-American agent and the racist, rogue “Ends Justify the Means” special team that he is assigned to.

That could have been interesting, a man conflicted by the many fronteras (frontiers) he must cross, personally. But first-time writer-director Andrew Dean couldn’t decide which side he was on, or where to take this slow-walk/lots-of-talk tale.

And first-time leading man Steve Oropeza isn’t any more up to the task at hand than Dean.

It sets up well, even if it begins in a heavy-handed “Mexicans stick together” ambush staged by smugglers against the “traidor” (traitor) that they see when Reyes Abeyta confronts them in his Border Patrol Agent uniform.

And then we hear about this new drug, “Kroc,” that the bad guys are bringing into the American Southwest. As a bonus, it carries “flesh-eating bacteria,” and there might be no cure.

Give me a break.

The writer-director’s sympathies lie with the out-of-control, murderous “any means necessary” special agent Ivan (Steven Sean Garland) who makes speech after speech about how “patriotic” he is and what “these people” are doing to “MY country.”

Him? He’s just “protecting our country from those who threaten our way of life.”

Reyes is needed for their team because he knows the lay of the land “and you speak ‘bean’ better” than any of the other trigger-happy psychopaths. He bristles at every shortcut they take, every drug they “sample,” every prisoner they kill rather than bring back for questioning.

He stands up to Ivan and the gang repeatedly, only to cave because well — he’s picking his spot? Gathering evidence as um, children are murdered? Looking for his cajones?

There’s a lot of Spanish spoken here — by the assorted Chacal Cartel functionaries, by the agents questioning them, by the boss of the cartel (Larry Coulter). It’s all spoken so slowly and deliberately that I could understand it.

Even the charisma-starved leading man, cast as a native speaker, sounds like he’s just learned the lingo. Garland has the most conversational fluency, on camera.

There are all these speeches ladled into all this slow-walking action, trash talk that’s slow-talked too.

“That hole in your chest hasn’t affected your ability to cut me down!”

Man, who talks like that, much less thinks that’s good dialogue?

Credits: Scripted and directed by Andrew Dean. A Vertical release.