Posted on February 6, 2020 by rogerinorlando

What to make of this burlesque in blood, “Birds of Prey?” All these fights, all that fight choreography, all that bloody violence and mildly-amusing mayhem should ensure another hit, cementing Warners’ command of their R-rated comic book adaptation niche.

But where does it does it sit on the sliding Warners/DC Comics adaptation scale? It’s not remotely as good as “Joker,” positively inconsequential when you hold it up against the best “serious” comic book adaptation ever and a legitimate Best Picture contender. Maybe that comparison’s not fair.

It’s an improvement on “Suicide Squad,” a tad better than “Aquaman,” not quite up to “Wonder Woman.”

There’s no sense comparing it to any Marvel Studios product, as apparently all the “funny” dialogue writers for comic book movies migrate there. The laughs in “Prey” come from Margot Robbie’s Betty Boop/Marilyn Monroe vamps as Harley Quinn.

“I have all my best ideas drunk!”

Ewan McGregor is aptly cast as Roman Sionis, a murderous mob boss with just a hint of whimsy about him. I laughed at one or two things he did, but at nothing he said.

The funniest line comes from Cassandra Cain (Ella Jay Basco), the under-age pickpocket whom the Birds of Prey defend.

“You’re not the ONLY one who makes money off dumb, rich white people!”

That was generous, because Basco is the weakest link in an uneven cast.

And whenever a new character to this big screen DC Universe demonstrates her superpower, the fanbase is thrilled.

But I’m on the fence about this somewhat heartless exercise in ultraviolence. There are interesting bits and cute riffs, some actresses I generally enjoy lending their presence to a superhero movie that dabbles in trying to be about “empowerment.” The look is that eternal DC-post-“Batman” gloom, so a tip of the hat to Art Director Kasra Farahani (“Black Panther,” “Captain Marvel”) and production designer K.K. Barrett (“Where the Wild Things Are”).

And those stunts (Jonathan Eusebio stunt coordinator) and fights (Jon Valera, fight coordinator) are impressive. You will believe these willowy ladies can outbrawl the biggest heavies in the business. Kind of. Some of the action was acted at half speed and sped up for projection.

But “Birds of Prey” relies on incessant voice-over narration from the psychiatrist turned Joker moll turned jilted lover out for attention, Harley Q.

And as any casual movie fan knows, voice-over is the laziest crutch in movie narrative.

The story is a shrug and the action arc ends where too many movies of this genre seem fated to end — in an epic fight in a derelict amusement park.

Again, there are more broken bones than laughs. An oversized CGI hyena for a pet? Right.

And it’s a little too close to “Suicide Squad” in one all-important regard. Take away Harley Quinn, and you’ve got no movie.

Harley has just been dumped by “Mister J,” the villainous patient she fell for who twisted up her mind and amped up her appetite for violence. Her days of breaking up bars and robbing supermarkets at will are numbered without her “master’s” protection.

“A harlequin’s NOTHING without a master!”

As she tries to adjust, a club owner/mob boss (McGregor) makes his play for Big Boss by getting his hands on a big diamond that has a code on it. The pickpocket (Basco) nabs it, a henchmen (Chris Messina, abandoning “nebbish” roles for once) and the club chanteuse Dinah Lance, aka “Black Canary” (Jurnee Smollett-Bell) are sent to fetch her, and it.

A veteran cop (Rosie Perez), who always has some guy stealing credit stolen for her big busts, is on the case. And this mysterious, skinny crossbow-wielding murderess (Mary Elizabeth Winstead) keeps popping up and killing people.

“They call me…” The only running gag in the movie? Woman can’t figure out her masked vigilante name, even if  “Crossbow Killer” is how everybody knows her. 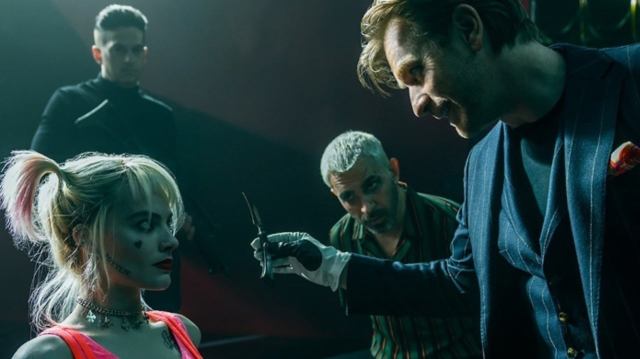 But “Birds of Prey” is never airborne when Robbie’s Harley is off the screen. Fantasizing a Marilyn-ish “Diamonds are a Girls Best Friend” production number in mid-torture, gleefully dispatching hired guns with sticks of dynamite, a baseball bat or a carnival “strong man” mallet, she’s the lifeblood of the movie.

Director Cathy Yan (“Dead Pigs,” “According to My Mother”) has a career-making blockbuster on her resume. But her big break is an empty whirlwind of mayhem, with a sloppily inconsistent narrative not entirely due to Christina Hodson’s (“Bumblebee”) script.

If it weren’t for all the fights, there’d be no forward motion to this movie at all. Very “Transformers” that way.

“Empowered” these women may be, but Perez should have been given funnier, cooler things to say and do, Winstead’s turn flattens out and Basco is just green.

Smollett-Bell is the only sidekick to pull her weight, and Robbie’s one-note take on Harley isn’t enough, by itself.

Fans will eat this up and probably forget it — save for the odd body blowing up — before the next comic book movie comes along.  But “Birds of Prey” is all empowered with no idea what to do with that power, nothing of consequence, anyway.

MPAA Rating: R for strong violence and language throughout, and some sexual and drug material