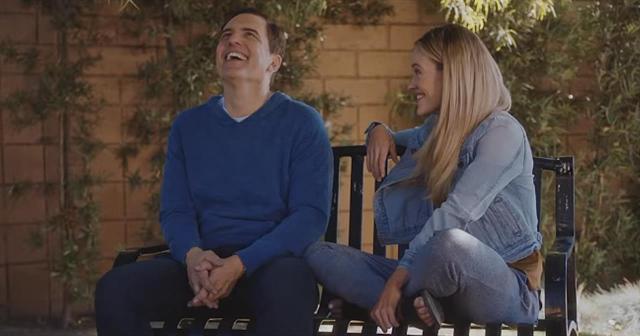 A common gripe about faith-based movies is how they’re so far sanitized that they’re removed from reality — real people in real situations having real conversations.

A romantic comedy about two people thrown together for a dance competition isn’t going to remedy that. But the song under the opening credits of “Faith, Hope & Love,” one repeated in the movie, jokes about “gin fizzes” and “booty-shaking.” So we’ll call that “progress.”

It’s a fizzy little comedy with a dollop of sadness and entirely too much “fizz” fizzed out.

It’s about a Christian widower (Robert Krantz) raising two girls and clinging to his advertising job by a thread. His littlest girl (Aria Walters) figures that setting him up with her ballet teacher for a “pros and schmoes” dance competition is just what he needs.

“They’re going to be dance partners and fall in love!”

The divorced dancer instructor, Faith (Peta Murgatroyd), is about to lose her studio and needs to win this competition, for the publicity and for the cash prize. She auditions male partners who fit the “schmo” (not a pro) definition, and in desperation settles on jokey, loosy-goosey Jimmy (Krantz).

Before you know it, they’re rehearsing and they’re sharing. He’s quick on the “Do you believe in God?” question, but he drinks a bit to drown his sorrow over losing his wife. She’s a tad bitter about her breakup and can’t figure out why she rarely gets past the first date — despite being a gorgeous blonde dancer with a Kiwi accent (Faith is an Australian emigre, Peta who plays her is from New Zealand).

Faith sizes Jimmy up like the outsider she is. “Shouldn’t you be saying something religious here? ‘What would Jesus do?'” She’s not being snippy. She’s just bought into the stereotype.

Jimmy tries to help her with her dating life, she has ideas for the career-saving pitch he has to make to a dating website, and they country dance, tango, hip hop (not really) and ballroom — rehearsing their way from her high school reunion to “the big contest.”

Krantz, trying WAY too hard playing a guy who tries WAY too hard to wring a laugh via slang and colloquialism, isn’t awful, although the script he wrote for this gives him and pretty much everybody else in the picture limited opportunities to shine or land a joke.

It’s a “formula” movie, start to finish. But the germ of a few good ideas are hiding out in that screenplay. Jimmy’s Greek (and Greek dancing) heritage makes its way into the picture well after the halfway mark. The actor-screenwriter was born Haralambos Karountzos and has been  in films, bit parts mostly, since the ’80s — for 35 years.

The Greek dancing scene is cute, the name he uses on the phone because nobody can spell “Elpidas,” his last name, is “Jimmy Hope.”

The kids are pretty much non-starters as characters, blandly-played to boot. Some dance numbers are cute (ish). And Krantz and Murgatroyd — yes, that’s a real name — have a little faith-based romance chemistry. He comes off as charming, which explains the picture’s healthy supply of star cameos.

Not one of them have anything funny (enough) to do, although Richards does seem to relish wearing a cowboy hat.

With faith-based films, message often trumps other considerations, not a happy situation in most movie genres. “Faith, Hope & Love” gets the “faith” in, and the “hope” and even a hint of “love.” It’s the comedy that lets this romantic comedy down.