Movie Review: Showbiz revenge is served in “The Riot Act”

My hat is off to any filmmaker who attempts a period piece, and the look and feel of “The Riot Act” is striking and believably late 19th century.

A tale of love, murder and revenge that borrows from “Hamlet,” it’s a bit of a stiff as a thriller, despite the attention to detail, the lovely pools of light much of the action (onstage and off) is photographed in.

Veteran character actor Brett Cullen stars as Dr. Pearrow, who lords over the small  city (Arkansas, Missouri would be a fair guess) where his stern word is law and his money talks.

He owns the local opera house, thanks to his lucrative practice. And when we meet him, he’s bawling out a tenor (Brace Harris) who has had the temerity to come-on to the doctor’s daughter. Jamison, the singer, is married, just another actor passing through town.

“If I were you, I would catch that late train tonight!”

Yeah, he will. But Allye Pearrow makes her getaway to join him, only to be wounded when her monstrous father guns down Jamison in her arms.

Two years later, a mysterious vaudeville troop has been booked at the opera house, where jack-of-all-trades “foreman” August (Connor Price) is good enough to do everything from book acts to sweeping up, but not good enough to warrant free passes to the shows he books.

And his grudge against the boss is nothing compared to the one a masked member of a “dumb” (no dialogue) act in the show carries. She’s got a British accent that comes and goes. Arkansas finds its way in there, now and then.

It’s ALLYE! And as she’s part of an act in which a duo carries out a very realistic shooting, we can see where this thing is going WAY too early.

Lauren Sweetster of “Winter’s Bone” and “Get Happy!” plays Allye, and the fact that she’s a dead-ringer for Cybill Shepherd probably gets her plenty of call-backs.

The script doesn’t give her a lot of chances to show us much, and she makes little of those opportunities. It’s a glum character given a one-note (and a dull note) performance.

There’s this very theatrical storyline that has Dr. Pearrow tormented by anavenger, masked in burlap, backstage at the theater. A “ghost” is haunting a guilt-ridden man, and there’s a show going on with a play within the play promising a finale we’ve seen set up far too early for its own good.

Which suits, because this is a very stagey show — actors “speechifying” because that’s what the script gives them to perform.

“My father has never seen far enough past himself to SEE his daughter!” 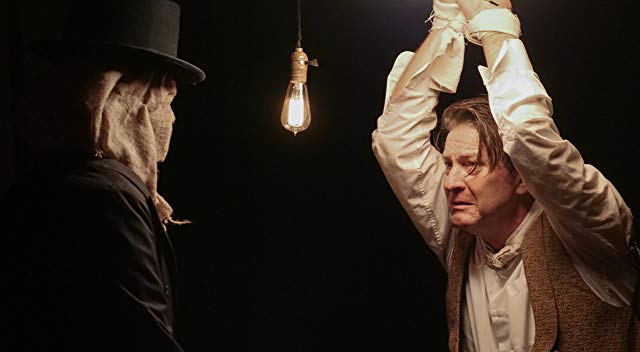 Writer-director Devon Park, who still counts his internship in the camera department on “The Help” as a highlight among his credits (short films), even filmed this like a play — that “pool of light” thing I mentioned.

There are non-starter script elements about “the progressive agenda” of this color blind vaudeville troupe (an African American strongman) and a potential love story between Allye and August.

A modicum of suspense, a lot of clever period props (a single-horn telephone, ancient light bulbs, vintage backstage gear) and a certain inevitability inform “The Riot Act,” a title which referred then, as now, to a British sedition law (I cannot find it was ever used as theater slang the way “dumb act” was).

Those virtues or at least characteristics don’t add up to much of a movie, which is a pity. That’s a lot of good period detail wasted.