Netflixable? Milian goes Down Under for “Falling Inn Love” 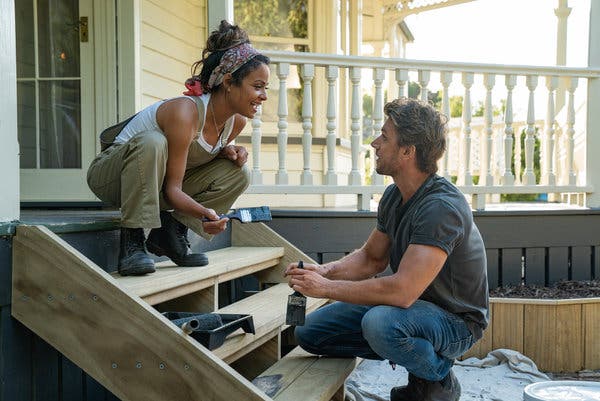 As New Zealand is a “bucket list” country for me, I’m always on the lookout for movies that show the islands, sans hobbits.

“Falling Inn Love” is a Christina Milian comedy about a San Francisco architect and “green” designer/builder who wins an inn on North Island in an Internet lottery.

Hey, they’re always giving away pubs in Britain and Ireland. Why not?

Thus, the stage is set for a fish-out-of-water comedy of the romantic sort. It has a few laughs, and even if the romance doesn’t have the sort of sparks that the best Netflix rom-coms manage and the supporting cast isn’t “colorful” enough to carry it, it’s just Kiwi enough to plow through.

I mean, how else are we going to get a load of idyllic New Zealand scenery, served up with a blast of Kiwi slang —“yakka,” “footie,” “The Wops,” “a squizz” — used, correctly, in sentences?

Gabriella (Milian, of “Be Cool” and TV’s “Grandfathered”) isn’t happy at work, dismissed at her firm, and uphappy in love. Longtime-beau Dean (Jeffrey Bowyer-Chapman) is commitment-phobic.

And then, the company folds and Dean rebuffs her ultimatum. Winning this inn in Beachwood Downs sounds like the ideal rebound.

“Your dream life awaits you in New Zealand!”

And as she’s a “Leap, and a net will appear” type — she’s off. But on arrival, she’s put out that some random hunk (Adam Demos) keeps running into her and trying to sweep “in and save the day.”

The Bellbird Inn? “What the…dumpster?” Yeah, the internet lottery was a bit of a scam.

So we’re set up for a comedy of DIY home (“inn”) improvement set in “The Wops” (boondocks), clumsily driving the beat-up manual transmission Land Rover, with the most competent contractor in town that very same hunk whom she keeps running into.

“Why are you everywhere I am?”

I laughed at the odd moment, here and there. There’s a goat who figures he owns the place, a rival B & B owner and assorted hardware, plant nursery, cafe (a gay couple) folks who trot out that delightful slang people like me put so much stock in.

It’s shot and cut like a TV movie, with no real edge, a dollop of sentiment and generic obstacles and objects (old love letters) to move the story along. Milian remains an engaging screen presence, if not anything like a great comedienne.

A less bland script would have helped. More edge, more slang, more contrast between the city girl (woman) and the country film.

“Falling Inn Love” isn’t unpleasant. It’s only problem is that it’s not enough of anything else, either.