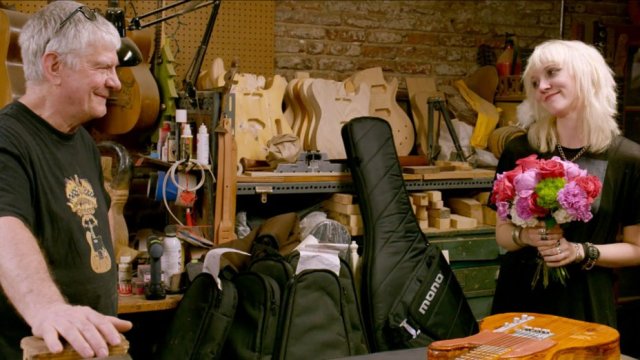 Rick Kelly was a famous New York luthier/guitar builder, a master of his trade, long before he added “The Bones of Old New York” to his work.

His Carmine Street Guitars shop in Greenwich Village was where musicians in the know — people like Lou Reed and G.E. Smith, longtime leader of the “Saturday Night Live” band — would come for custom-made axes, or to have their guitars –acoustic or electric, ancient or new vintage — repaired.

Then he got the idea of making guitars out of wood salvaged from bars and other businesses torn down, from burned-out churches. He’d scavenge the extinct elm and Ash, stack the lumber in the back of the shop and later take a scroll saw to it to create necks and bodies for guitars as works of art.

Inside the hollowed-out body, hidden where the neck attaches, he notes the place the”Bowery Wood” came from, the type of wood and its age.

Filmmaker Ron Mann lets us see the dust-bunny collecting business, where former sculpture student Kelly practices his trade with the quiet patience of a master craftsman. The walls of the shop are a clutter of news clippings and tribute photos from the guitarists who bought Rick’s guitars. Mother Dorothy answers the grimy, land-line phone, keeps the books on an adding machine and tries to keep the dust bunnies at bay.

Cindy is a 25 year-old with great skills with woodburning tools, crafting a “tribute to the Traveling Wilburrys” model, complete with engraved/burned images of each of the members of the All Star band, which came and went before she was born. When she or Rick finishes a guitar, she posts a picture on Instagram — “#guitarporn.”

Mann’s unhurried movie purports to show “a week in the life” of this guitar shop — Rick, pedaling a 10 speed to work, running the drills, saws and routers, and handling the rasps, files and draw knives of his trade.

And as he does, famous pickers drop by, to shop, to play, to chew the guitar fat.

Lenny Kaye of Patti Smith’s band drops by for a repair.

Guitars Kelly built for Lou Reed that came back to him after Reed’s death are trotted out for Reed’s guitar sideman, Stewart Hurwood, to play and see how they’re aging, how they sound now.

Jamie Hince of The Kills, Charlie Sexton of Bob Dylan’s touring band, Nels Cline of Wilco (shopping for a guitar for Jeff Tweedy), Christine Bougie of Bahamas, all “stop by” to visit, shop and pick.

Kelly, a soft-spoken enthusiast, shows off 150 year-old slabs from Chumley’s, a pre-Civil War era speakeasy, a gorgeous piece from the former Bowery bar and brothel known as McGirk’s, from a burned Serbian cathedral, and from another even more famous watering hole, McSorley’.

“People’ve been spillin’ beer on this wood for 160 years!”

Kirk Douglas of The Roots appreciates Kelly’s mania for simplicity, in both guitar making and the music he likes to hear from them. Kelly fell in love with the feminine shape of the Fender Telecaster, the quintessential solid body electric guitar of the rock era. Although he has created all manner of far-out designs, hollow bodies and Gibson Les Paul clones, it’s the simple “Tele” that is his great inspiration.

Eszter Blaint picks at a guitar with a fingerboard that looks like rescued, chipped lava. Kelly’s new passion of for worm-eaten, ancient wood that he leaves partly finished — “survivor wood.” 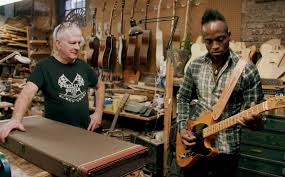 The film may feel scripted and staged — filmmaker and Sqürl band guitarist Jim Jarmusch comes in for a repair to his ash and catalpa wood acoustic, a tactless monied young realtor who just sold the property next door drops by to imply the shop is not long for this neighborhood. It’s more an essay on the Last of His Kind than a fly-on-the-wall documentary.

That doesn’t dull its virtues. We get a lesson on how wood for any instrument, even one plugged in, ages, feels and sounds. Some of the folk arty guitars look like an invitation to get mid-performance splinters.

But as Bill Frisell picks up a primitive-looking instrument and starts playing the music he loved as a boy growing up in Denver, “Little Surfer Girl,” the magic being made in that sea of wood, tools, ukuleles, banjos, hollow and solid bodies of every description, you can’t help but hope the pupil learns all the master has to offer and carries the trade forward.

“This one just went UP in price. Now it’s got Bill Frisell in there!”

Maybe she’ll outgrow that mania for gaudy woodburned filigree and flourishes — “#guitarporn” — and absorb the simplicity Kelly has kept as an ethos, in his instruments and the music he loves.

“Anything more than three chords is just SHOWING off!”