This week’s version of “She’s Out of Your League,” a rom-com concept Hollywood — well, male Hollywood — never tires of, stars Charlize Theron as the accomplished, runway-ready object of desire and Seth Rogen as the dumpy beard-o who totally has a chance.

You can’t tell, but I was looking forward to loving this.

Too harsh? One of Rogen’s go-to moves as a funnyman is bugging his eyes out and delivering a line — punch-line or zinger — at a bellow. He bellows almost from start to finish here, playing Fred Flarsky, a newly-unemployed investigative journalist, muckraker and gadfly.

Theron? Oscar-winner she may be, but her comic chops seem limited to “too beautiful to bother with you and knows it.” See “Young Adult” and no, she wasn’t that funny in that, either. She’s got “mean girl” written all over her.

We meet Flarsky in the most promising circumstances, under-cover infiltrating a meeting of the skinhead brain trust known as “White Nation.” His “F-the-Jews” and “Heil…everybody” aren’t that convincing. He’s about to get a swastika tattoo when the jig is up and he’s out the window.

But all is for naught, as Flarsky’s publication, The Brooklyn Advocate, has just sold to a Murdoch-esque right wing media empire. Andy Serkis plays this version of Rupert.

Flarsky’s college bud, Lance (O’Shea Jackson Jr. of “Straight Outta Compton”) takes off from running his tech firm to buck our boy up. A little drinking, an invite to a reception.

Hell, that lady it’s for, the Secretary of State? She was my baby sitter!

How an alleged journalist missed making the connection when Charlotte Field was first appointed we can only ponder.

They connect, and even though he’s dressed like a 38 year-old unkempt hipster and comes off as a tad angry and entirely too profane to be articulate, she is intrigued.

Nostalgia? Boyz II Men are performing at the reception. All we’ve learned about Field is her workaholic tendencies and loneliness.

He’s a connection to the passion for political causes (the environment, etc.) she had before she started selling out to appease her ex-TV star president (Bob Odenkirk, amusing). And Fred’s funny, if off-color. He’ll be perfect to punch up her speeches and give her a sense of humor. 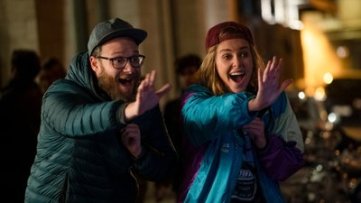 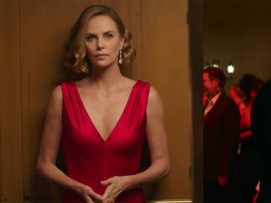 There’s a handsome Canadian prime minister (Alexander Skarsgård, funny for the first time ever) who’d be suitable dating material for a presidential candidate.

But does he stand a chance against a ball-capped goof who can turn her on to all the latest jams, introduce her to Molly and sneak her out clubbing?

The script by Liz Hannah and Dan Sterling doesn’t give the leads a believable and funny arc, or the supporting players much that’s funny to play. The political jokes, about the press baron who “believes that hurricanes are caused by gay marriage,” the “Fox & Friends” type show so sexist it’s supposed to be more over-the-top and funnier than the real thing, fall flat.

The introduction of the perils of being a female candidate (double standards, etc.) covers no new ground and is rarely brought up in a funny way.

But sometimes it is. And sometimes Rogen, a veteran of the “Funniest line on the set wins” school, finds a laugh on their global Secretary of State tour — receptions in Hanoi (“Sorry for what we did to your country.”) and Buenos Aires.

“It’s cool to be in Argentina. I think some of the guys who killed my grandparents are here!”

But the whole affair is so slow as to let the mind play casting exercises. This seems instantly dated in 2019. Would it have worked with a male candidate and frumpy female speech writer who used to babysit for him?

Nah. Rebel Wilson’s got as much work as she can handle.

MPAA Rating: R for strong sexual content, language throughout and some drug use