Movie Review: Beware the Bunnyman out for revenge as “Rottentail 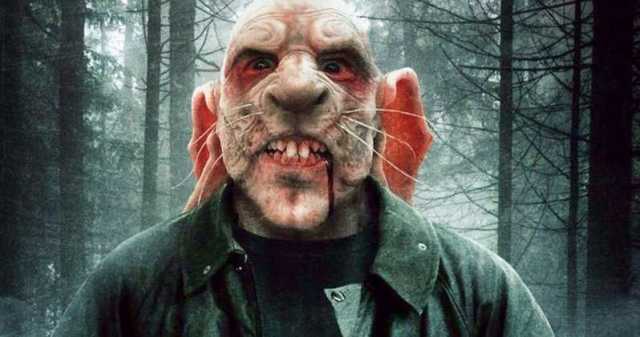 Again with the bunnies?

As if Jordan Peele’s “Us” wasn’t the Easter present nobody asked for.

“Rottentail” is a wisecracking C-movie creature feature that lets us in on the joke. The jokes. All of them.

It’s an under-funded, gory goofball romp about a meek science nerd transformed into an avenging bunny monster, getting even with the military man who oversees his experiments, and the military man’s minions, on his town and on the bully who murdered Peter Cotten’s bunny long long ago.

Yes, it’s based on a graphic novel. No, I’ve never heard of it either.

Co-writer/director Brian Skipa may have had to cut corners on the rubber rabbit monster suit, the military hardware and uniforms he needed for his age-inappropriate extras, on the explosions and fight choreography. But danged if he doesn’t wring some fun out of a very bad movie that was never meant to be very good.

The coup might have been landing veteran character actor Corin Nemec as Peter Cotten, his lead, and feeding the guy goofy lines to go along with all the goofy faces this dork gives us before and after he’s bitten by the MR experiment Dr. Serius Stanley (Gianni Capaldi, over the top and funny) created in the labs the military runs inside what is supposed to be a Star Chewing Gum factory.

Cotten was bullied as a child, and he’s bullied now — by Dr. Stanley, whose MR (Monster Rabbit?) bites him, by Jake Mulligan (William McNamara), who bullied him as a child and pushes everybody around as a crooked, immoral TV preacher now, and by General Phelps (Tank Jones), the “mother-f—–g” general who wants him to “Get with the gettin’ while the gettin’s good” and get with the program.

But Peter Cotten’s “condition” is evolving. A trip to the toilet gave him a clue, and no, we’re not talking pellets. They come later.

He takes on Jekyll and Hyde tendencies at Mel’s Diner, where they want you to “Come in and Bang us for our Angus.”

His hands follow his genitalia in transforming — into clawed paws. And then there’s that bellow that wholly replaces his ordinarily meek voice the minute his ears reach full flower. 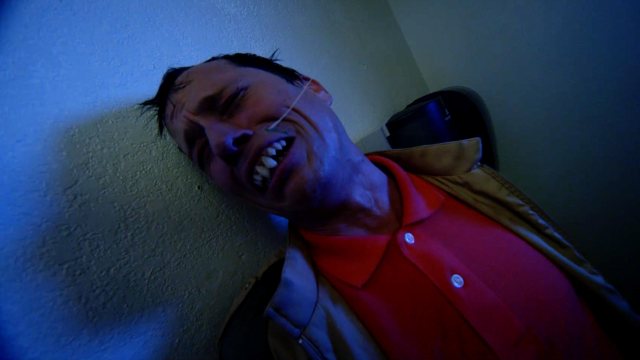 He is “Bunny STRONG!” And lightning fast. You’d better not cross him, even if you’re armed and warn him to “put’em up.”

He goes on a rampage, pausing to light up with stoners in a van, or hit the local roadhouse for a drink. Or three.

“I need two Slippery Nipples in my mouth, right now. Sex on the Beach would be nice…”

Nemec treats the whole enterprise as a lark, chomping his veggies like a rabbit, bellowing like a drunken thug with Tourette’s.

The dialogue is colorfully off-color when Skiba and David C. Hayes’ script isn’t trotting out the tropes of many a creature feature.

“This is the work of a MADMAN!”

“You’ll NEVER GET AWAY with this!”

“Kill the rabbit! Bring me his BRAINS!”

And you’ve just made yourself a C-movie, which is, by definition (I’m making this up on the fly.) a D-movie with laughs. It’s not much, but what it is can be funny.

Credits: Directed by Brian Skiba, written by David C. Hayes and Brian Skiba. based on the graphic novel. An Ammo Content release.