Posted on April 2, 2019 by rogerinorlando 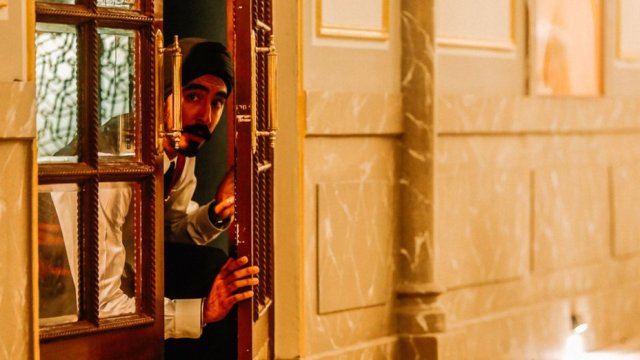 It almost boggles the mind that the world’s first nuclear war didn’t happen in the weeks after the terror attacks on Mumbai, India in November of 2008.

The moment the coordinated assault on 12 locations in the coastal city, indiscriminate mass slaughter with machine guns and bombs, began, Indian TV and world cable networks were describing it as “military grade” carried out with military precision.

Nobody was surprised when Pakistan’s military intelligence services were implicated in the planning, training and equipping of the young, indoctrinated fanatics who carried them out. If ever there was an act of terrorism as act of war, this was it.

“Hotel Mumbai” is a harrowing, straight-no-chaser account of the assault, which climaxed with a murderous takeover–with hostages — at the city’s venerated Taj Palace luxury hotel.

First time feature-director Anthony Maras (he was an editor on the picture as well) builds a suspenseful multi-character/multiple locations narrative with a military precision similar to that of the attackers. He uses his few “name” stars well, takes care to paint a telling portrait of the gullible, naive Pakistani Incels who carried out the “mission” and neither flinches from nor magnifies India’s inept and slow-footed handling of the crisis or of cable TV’s clumsy culpability in live-shooter situations of this magnitude.

The result is a powerful, edge-of-your-seat thriller, with “Who will live/Who will not?” suspense, a “Die Hard” without laughable Hollywood swagger, tasty one-liners or heroics that defy logic, common sense and physics.

We meet the attackers as they boat in on a Zodiac, ear-pieces plugged in, exhorted (in Punjabi, with English subtitles) by the unseen “Brother Bull” that “God is with you” and “Paradise awaits you.”

They come ashore, laden with heavy duffel bags and backpacks, scattering into taxis.”Look at all they’ve stolen,” they gripe — the ultimate backward hicks resenting a neighbor experiencing an economic boom, with full shops, Western pizza and the decadence of indoor plumbing to flaunt over their violent, unstable Muslims next door.

But we also see Arjun (Dev Patel of “Slumdog Millionaire”) prepare for work, a poor man still trapped with his wife and little girl in the city’s slums, but a Sikh with hope for the future — thanks to his job at the swankiest hotel in town.

“Here at the Taj, guest is GOD!” Chef Oberoi (the wonderful character actor Anupam Kher) lectures his wait staff as he checks their uniforms and their hands for cleanliness. The early scenes in the hotel underscore this — VIPs such as Zahra (Nazanin Boniadi of “The Big Bang Theory” and “How I Met Your Mother”) and her architect husband David (Armie Hammer) catered to, even their Australian nanny (Tilda Cobham-Hervey) coddled.

Others are seen making their way to restaurants, including a secretive Russian oligarch (Jason Isaacs, always good) arranging the night’s visit by hookers via cell phone.

Meanwhile, at a train station, in restrooms, in the streets in front of a restaurant, the teams of two unfold their Kalashnakovs, storm out and open fire.

Their phones stay on, because Brother Bull crows that “I want to hear their cries with my own ears!”

If there’s an unrealistic touch to Maras’ treatment of “India’s 9/11,” it is the chilling silence after the bursts of gunfire. No one is wounded? Involuntary cries, screams and groans of the injured and terrified? Strangely absent.

The staff at the Taj is taken as utterly off-their-guard as everyone else. Tourists and locals flee down the street from the gunfire and grenade explosions, looking for sanctuary in this edifice of excess, gloved waiters and uniformed maids.

With monstrous thoroughness, the hit squads execute strangers, shoot up the first police car on the scene and converge on the Taj. 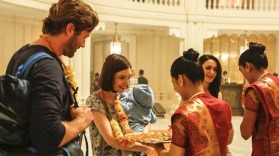 They massacre virtually everyone in the lobby, gun down the fleeing and start the process of going room to room — with helpless patrons and staff trapped in a restaurant, a kitchen, in their rooms awaiting death or not realizing until too late that death is coming.

John Collee (“Master and Commander”) co-wrote the script with Maras, and they break up the action into suspenseful episodes — an unaware nanny trapped with a baby in a suite, diners and staff cowering beneath the tables in a restaurant, and a take-charge chef (Kher) organizing his kitchen staff to save people until the police arrive.

Which they do. Except, they don’t. One of the most notorious cases of “waiting for orders” (and SWAT teams from New Dehli) of recent history plays out as only a couple of cops have the temerity to go in, realizing that every shot they hear and every second they wait, another person dies.

The Europeans, Americans and Australians in the hotel find panicked ways to mistrust the Indians on staff — the turban-wearing Sikh Arjun, the multi-lingual married-an-American Zahra (Boniadi). The crusty Russian takes a dim view of waiting for help and the offer of prayers when he decides to get out.

“You can SAVE your prayers,” he spits. “THAT’s what STARTED this s–t!”

The script finds amusement in the immature young brutes who do the killing, marveling at flush toilets, enjoying their first-ever leftover pizza, eaten off a maid service cart mid-carnage.

God forbid it have pork on it.

I was surprised at how much the motivation seems ascribed to class resentment and poverty and not just dogma and the easy leap to radicalization that Islam seems to provide. That’s smart and seems to jibe with the demographics of terrorism today — young, poor, desperate and easily manipulated.

But what Collee and Maras and their cast get across most clearly is the utter helplessness and hopelessness of the victims. Again, this isn’t “Die Hard.” In the real world, in a terrorist situation like this, the cops are outgunned and the other victims have little chance of collective action and no chance without that as the heavily-armed murderers are working in teams.

“Hotel Mumbai” makes it easy to recognize heroism, and to hope that some of the “lessons learned” can prevent this from ever happening again. But the region’s politics, religion, class and the age of the perpetrators (humanized, a bit, but cold-eyed killers to a one) ensures that it will.

And next time, the response, especially on the Subcontinent, could be radioactive.