Movie Review: Which of these Four Sisters has “Crossed the Line?”

Posted on January 23, 2019 by rogerinorlando 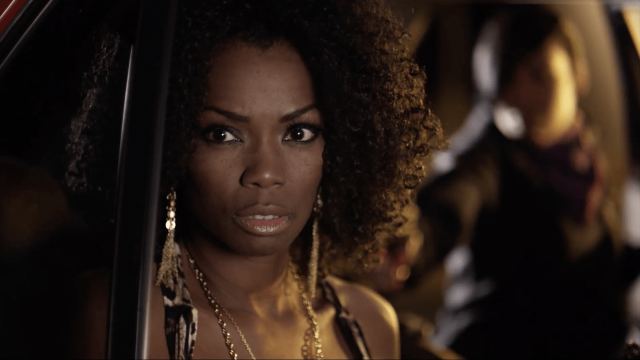 “Crossed the Line” is a soapy, sloppily-plotted thriller that might have played better on the TV network that originally produced it. But thanks to its violence and language, this 2014 Ice-T versus four vengeful sisters tales earns its release on assorted video platforms.

Caryn Ward of TV’s “Grown Folks” and “Fame” is the LA sibling keeping her family and the family business running after their mother’s death.

That flower shop gives them all a middle class life and the younger sisters the chance to dream bigger. But the shop is on the edge of South Central, and it’s a convenient “respectable” and above-board business, the perfect place for drug drops.’

Which is why Miguel (Ice-T) wants it. And when Kyra won’t sell for the right offer, Miguel’s boys stage a robbery and club Kyra as they do.

Whatever the streetwise Denita gets from this, Sherrie’s too-soft-to-be-a-thug secret beau, Twist (Sam Sarpong) sees enough to know who did it, and plot his revenge on their behalf.

That’s what “Crossed the Line” is about, a little lecture Miguel gives in the opening moments — “Revenge,” he says, “is how the world makes stuff right.”

Twist robs an underage aspiring gang-banger of a bag of drugs, hides them with Sherrie, and soon Miguel’s gang AND the cops are all over the sisters, landing Kyra in jail, with Lynn bellowing “We’ve gotta pack heat ourselves,” and “We want justice? We’re gon’ have to GET it ourselves!”

A cycle of vengeance ensues that swallows everybody we see here, pretty much. 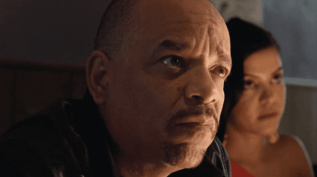 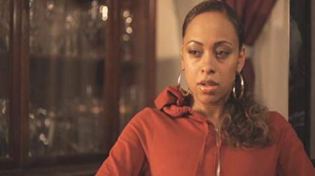 Movies that don’t work share one thing in common, that first moment that takes you out of the story. Here, it’s the police raid on the sisters’ house. It’s a 65 second affair that gets them through the door, finding drugs in Sherrie’s room, Kyra accepting the blame, the cops cuffing her and all but sprinting out.

No search for more drugs. No questioning of the siblings. Nobody by Kyra summarily taken “downtown” and jailed.

Twist’s inept, under-motivated stalk and robbery were weak, but this scene needs a walker or a wheelchair.

Even as Kyra makes a prison buddy, Juicy (Vanessa Williams, top photo) and two sisters’ culpability in all this misery that’s visited on them all becomes clear, the movie’s little grace notes — Juicy’s sassy prison pose, Miguel’s “Thou shalt not steal” lecture to a little kid who needs to learn “revenge,” not petty theft — are overwhelmed by the mendacious mediocrity of the dialogue and plotting.

The cast is game enough, and the simple parable plotting of the story plays. The players deserved sharper characters, a more surprising narrative and better lines.

Because scene by contrived scene, loaded with lapses in logic and freighted with teppid dialogue, “Crossed the Line” stumbles forward towards an all-too-obvious conclusion which cannot get here soon enough.