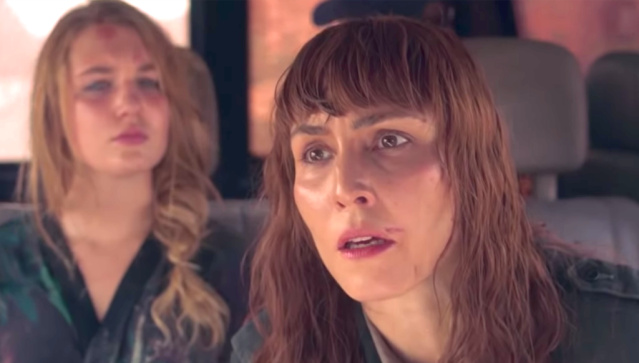 The best action pic you’re going to see this January isn’t on the big screen. Well, depending on the size of your TV, it could be.

It’s “Close,” a Netflix kidnapping thriller starring Noomi Rapace as an utter badass “close protection” operative — a bodyguard — who takes her work seriously and takes down villains by the score.

Rapace has worn a physical competence about her in action roles since the very beginning of her career. Unlike Linda Hamilton, Zoe Saldana or Sigourney Weaver, the one and only “Girl with the Dragon Tattoo” didn’t transform into a convincing kick-you-know-what and take names heroine. It’s been her brand from the get-go.

We meet “Sam,” her character in “Close” in a Middle East combat zone. The reporters she’s escorting are ambushed.

“SCREAM!” she yells at the woman (Olivia Jewson) trapped in the SUV with her.

Sam smacks her. HARD. She screams. Damn right she does. The fact that the actress playing the reporter is the director’s sister just makes it Freudian and funny.

Sam may be combat competent, canny and cunning, but she chain smokes and drinks to fight off the shakes. She’s still wearing the cuts she got, shooting her way out of that mess, when she’s offered that next job.

“What happened to your face?”

A rich heiress (Sophie Nélisse of “The Book Thief” and “Mean Dreams”) needs protection on a trip from London to Morocco, where her just-died-father raised her. He’s left her his phosphate company, one he took over while married to his second wife (Indira Varma of “Game of Thrones” and “Exodus: Gods and Kings”). As her family started Hassine Mining, she’s not happy about that.

Their Chinese competitor also might have ideas about the new club-hopping majority stockholder. And then there’s the fact that however western Morocco seems, it’s still a country as easily accessible for terrorists and criminals as it was back when Rick was running the Cafe Americain in “Casablanca.”

Sam has just a single outing to prove she’s the world’s toughest wingwoman/c—blocker in a club — “Who do you think you are? My Mom?” —  before they’re on a plane bound for the family “castle” in central Morocco (“Close” was filmed in and around Marrakesh and Casablanca).

“Welcome to my prison,” Zoe mutters. And when we see the hi-tech security systems there, we get it. Of course, Sam looks at all those cameras, those armored shutters that doors that seal when a threat is detected, and complains to the guy is charge (Akin Gazi) that there aren’t enough “boots on the ground.”

Co-writer/director Vicky Jewson (a “Lady Godiva” film and “Born of War” are her major credits) cooks up some splendid precarious situations for Noomi the Badass to fight her way out of — starting with the breeched fortified house but including a dumpy hotel room, a crowded police van and eventually, the water-filled catch-tank of a Moroccan fishing boat.

The bad guys speak French and Arabic, and their plotting and threats are not translated. That’s always a smart play. We experience the unknown threat the way Sam does. Zoe? She grew up here. She speaks the languages.

The Swedish Rapace thrives in roles that call for action, toughness and vulnerability. She’s perfect in this part, where her forward motion and capacity for acting out violence drives the picture.

It’s not a particularly surprising thriller, but it is lean and bowstring-tight. And Rapace  absolutely sells it as plausible and herself as just the badass you want in your corner when the villains sneer and the bullets fly.