Documentary Review: A Yazidi woman carries her people’s hopes “On Her Shoulders” 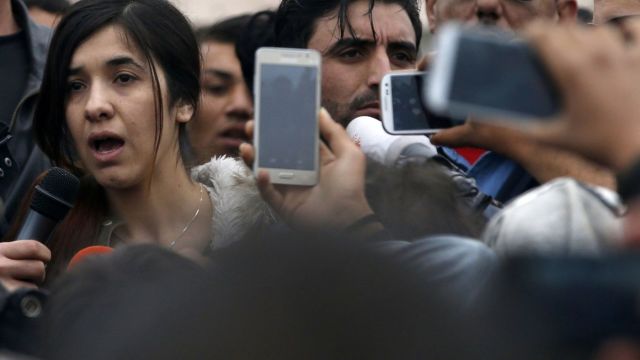 It’s not easy being an icon.

We can feel Nobel Peace Prize winner Nadia Murad wince as one of her fellow Yazidi introduces her at a Berlin rally as “our only hope.”

We see that look again when former International Court lawyer and friend Luis Moreno Ocampo hectors her with “You are the only one who can do it (find a long term solution for the Yazidis),” punctuating his pep talk about how that solution, helping the Yazidi keep the land a genocide forced them from in Iraq and Syria, is “YOUR job.”

And we feel her pain in a grueling, never-ending series of interviews with media people, coaxing, apologizing, sympathetic, but always ALWAYS pressing onward to get details of the slaughter of her village, her rape and enslavement by ISIS brigands.

Yes, even the seemingly sensitive yet persistent female CBC Radio talker who makes her cry. We never see her interrogator, just Nadia in tears.

“She wants the whole world to know what she can never forget,” a TV reporter declares. Because Nadia Murad cannot forget. The world won’t let her. There’s too much riding on that memory, her descriptions of it to the U.S. Congress, to the Canadian Parliament and the U.N. General Assembly.

It’s all “On Her Shoulders,” as the title of a fairly candid new documentary about Murad declares. She was 21 when she was raped, 23 when most of the movie was filmed and is only 25, now. And this is her life, “the only hope” for the surviving Yazidi, non-Muslim Middle Easterners largely scattered across Europe after ISIS set out to wipe them from the face of the Earth in 2014-15.

The film follows Murad through the media grind that is her life, intimate only with the leaders of YAZDA, a non-profit devoted to helping the Yazidis and putting their plight before the world.

She counts high-profile human rights lawyer, fashion plate and George Clooney spouse Amal Clooney among her fans and friends, people looking for legal recourse against the Islamic State monsters who set out to destroy her people simply because they exist in the otherwise almost-entirely Islamic Middle East.
“They should be held accountable,” Murad says when pressed, time and again, about what she wishes for her people and what she wants the world to do about the crimes against them.

We see her mentor and and translator Murad Ismael, executive director of YAZDA coaching her, helping her polish her speeches and get them down to UN-dictated length, expressing through her the hope that “standing before them, this time they wouldn’t cover their ears.”

Speaking directly to the camera, she notes attempts at Western style psychotherapy to help her cope with the horrific trauma she faced. Therapy, she realized, wouldn’t help. Survivor’s guilt drives her to help her people, to speak out on behalf of other women who endured and still endure what she went through.

At every stop, it seems, there’s somebody fresh to coach her, lecture her on how important her role is, how big each moment/speech is for making her case for the Yazidi.

And when she’s speaking directly to the camera, she confesses that all she really wanted in her life was to open a hair salon in the Mount Sinjar region where she grew up, to help women and girls like her “feel special” in that small way.

I loved/hated the way director Alexandra Bombach turns the TV/radio coverage, the appearances before government bodies, into endless repetition of her horror. The most candid moments show her and her trailing camera crew goofed on by young Canadian women on a mall escalator, women not much younger than Nadia.

That isn’t her life, and she probably missed out on it altogether, even if we see snippets of her shopping.

She and her translators are subjected to a tour of the Canadian Parliament, complete with a photo op with the legislator who arranges it (unencouraged). They watch an Ottawa honor guard on parade and Nadia laments how Iraqi, Western and Syrian troops are engaged in a brutal struggle with the people who slaughtered her people.

“People here get to WATCH their soldiers,” she says, seemingly unconcerned that the film crew will translate her remarks later. She shops for presents for Yazidi refugees in a Greek camp, follows an endless series of TV reporter instructions for cover footage walking and talking with reporters who do not speak her language.

But “On Her Shoulders” also gets to the essence of Nadia. Her speeches (in English and Arabic with English subtitles) move audience after audience to tears. Legislators weep and embrace her and make promises.

And then that Ocampo shows up, remarks how helpless these activists are, working so hard with so little to show for it, and reminds Nadia of the OTHER thing she can never forget.