Netflixable? New documentary asks, “Feminists: What Were They Thinking?”

Decades of young women reluctant to identify themselves as “feminist” is explained in just a moment, when artist and feminist Judy Chicago remembers her college years in the ’60s.

She’d say something about women’s rights back then, and she’d get “What ARE you, a Suffragette?”

No no, she’d say. When people thought of Suffragettes, they thought of activist little old ladies 50 years before. “I didn’t want to be thought of like that.”

Same with today, Chicago says with a laugh in the new Netflix documentary, “Feminists: What Were They Thinking?” Young woman don’t want to identify with the “old ladies” who are the icons of the women’s rights movement, or with people her age (and Jane Fonda and Hilary Clinton’s age).

Director Johanna Demetrakas’ “What Were They Thinking” is a sprawling  “then and now” documentary built around a 1977 art photography book by Cynthia MacAdams, “Emergence,” and a retrospective exhibit, Feminist Portraits: 1974-1977, which recalls her work capturing self-identified feminists, famous or young and obscure, during the push for the Equal Rights Amendment.

“They look free,” filmmaker Wendy J.N. Lee says, poring over the book’s pages. “You want to be like them. Its contagious.”

Demetrakas interviews women who appeared in the book then, among them Lily Tomlin, Laurie Anderson, Jane Fonda, Michelle Phillips and Sally Kirkland. They talk about the world they were born into, with girls shoved into lives wholly limited by their gender, with abortion illegal and birth control rigidly opposed by corners of the religious, cultural and political patriarchy.

They wonder, “Why is anger not considered feminine?

One declares “I need to fight to be who I was.”

And young women interject themselves into the conversation by freely identifying with this earlier generation, noting how much progress was made — and how little seems to have been made in the decades since feminism was demonized by the Far Right.

In her film, debuting on Netflix Oct. 12, hot on the heels of the Kavanaugh Supreme Court debate, Demetrakas notes that MacAdams noticing women “looked different because of feminism,” but “their eyes remind us that the challenge is still there.

Screen legend Jane Fonda admits that thanks to the rigid gender roles of her early hears, “I’ve only known for ten years that ‘No’ was a complete sentence.” 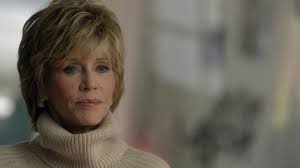 Present day protesters — No, nobody is PAYING them to protest — say, “I’m done. I’m wanna be done fighting, but I can’t.”

Dematrakas, who gave us “The World of Sesame Street” and “Amandla! A Revolution in Four Part Harmony,” covers so much ground and includes so many voices that this feels like a two-night PBS “American Experience” slashed into 85 minutes.

The tyranny of fashion, the battle over abortion and the ERA, feminists made when “putting my husband through medical school” proved to be an unfair bargain, when their marriage to an enchanting foreigner turns out to be slavery in Afghanistan, others who only discover how bad they’ve had it after realizing they’re gay, Phillips recalling the servile nature of her “employment” by her then-husband in The Mamas and the Papas, rotests and art, the special difficulties facing women of color protesting for racial civil rights AND gender ones, personal stories of abortions and divorces — it’s overwhelming.

Having Fonda here is understandable, but she imbalances the film, repeating stories that you might have heard on her the HBO documentary about her that premiered last month.

“All your life, people say ‘Be a good girl.’ That implies that you’re naturally not.”

But Tomlin’s feminist stage shows are sampled, and other plays. The film of “The Children’s Hour” and Germaine Greer’s defiant late ’60s TV interviews all paint a portrait of an almost giddy, determined era when women found common cause, united behind it and changed the world, if only briefly in some ways.

And the inclusion of so many young voices gives “What Were They Thinking?” an optimistic feel. Misplaced? Only November will tell.