Netflixable? So what did we miss when we ALL skipped Ryan Reynolds et al in “The Captive?”

He’s fretted in the most public, often comic ways, about his Canadian ancestry, his duty to the Motherland.

So it’s only natural that Ryan Reynolds should make a movie with Atom Egoyan. Who’s more Canadian than that?

And it’s about a father who loses his daughter to a pedophile ring. What’s more Canadian than that?

But “The Captive” is a 2014 mystery in the Egoyan (“Where the Truth Lies,” “Adoration,” “Chloe”) style, cryptic beyond cryptic, not playing fair with clues, plot logic and timelines. Shockingly, nobody saw it.

Cassandra, “Cass,” was an aspiring figure skater. She was good, and landscaper dad (Reynolds) and hotel maid mom (Mirielle Enos) were bursting with pride.

One wintry day’s “pairs” practice skate with her partner goes as well as ever, and Dad stops with her on the way home to pick up a pie at the truck stop. Cass disappears. 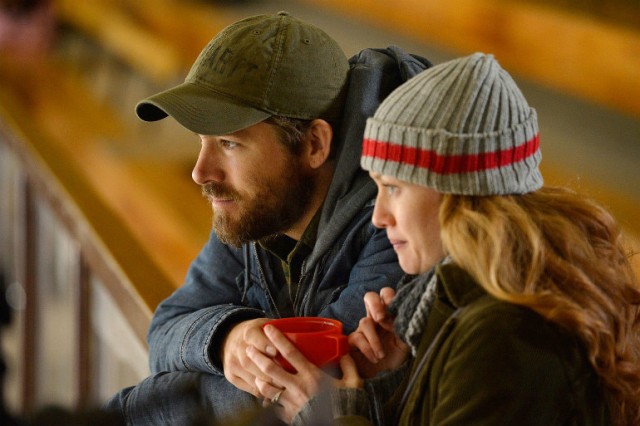 Egoyan’s story skips back and forth in time, from the job interview of a hot dog detective (Scott Speedman) who wants to join the pedophile/cyber crime detection unit, to the day he interviews, with his boss (Rosario Dawson), the father (Reynolds) whose daughter disappeared. The cops’ questions accuse the father.

“They’ve taken my daughter, and I want to know what you’re doing to help!”

Dad’s enraged and panic-stricken, but his wife goes berserk when he breaks the news to her, a fury of blame and grief.j

Meanwhile, the captor (veteran heavy Kevin Durand) has video feeds of all sorts of CCTV cameras, even in the hotel rooms Cass’s mom cleans, taunting his hostage even as he’s re-assuring her by letting her see her mother, from time to time.

He’s part of “a whole new class of freaks,” the cops suggest. The monster leaves the girl’s mother clues, over the years — a hairbrush here, a baby tooth (in a jewel box) there — IN the hotel rooms she cleans daily.

In the present, eight years after the kidnapping, Cass (Alexia Fast) is resigned to her fate, reasoning with her captor, “protecting” she thinks, her parents by not trying everything she can think of to escape. She is just a beautiful blonde, playing the piano, wondering if he’s “lost interest” in her “now that I’m all grown up.”

The section chief (Dawson) and her detective are now in a relationship.

The kidnapper works for a big-shot developer (Bruce Greenwood) who also heads a charity that raises money for at-risk kids.

And the father of the victim has lost any faith in the police even though his increasingly frayed wife continues to visit Dawson’s unit boss. Dad has gone off the deep end, sure he’s lost his wife’s love, hellbent on “keeping my eyes open,” certain that he will find his daughter, discover clues on his landscaping treks over Canada’s highways and snow-covered back roads.

In a nutty, illogical and dream-interpretation driven thriller, that’s just the sort of thing that happens.

Speedman’s cop is an under-developed “cowboy.”

Enos gives the mom a mania you appreciate, and Reynolds manages both the breakdown and man-taking-action moments he must play with his usual bite and aplomb.

But Egoyan, exercising his passion for melodramatic music in the score, snow in his settings and the ripple effects of a tragedy (Cass’s former partner cannot escape her kidnapping, either) in his stories, refuses to let us connect the dots that must somehow exist only in his mind.

Seriously, if you see the resolution to this coming based on the information the viewer is given by the storyteller, my hat’s off to you.

Only in Canada would an artist this fascinating, home-grown and maniacally uneven continue to draw the subsidies, attention and loyalty from his fellow Canadians, now big Hollywood stars, to get his increasingly unhinged thrillers made.

MPAA Rating: R for language and some violence