Movie Review: Filipino Cops fight their way out of a trap in “BuyBust”

Nobody goes down quietly in “BuyBust.”

Cops and drug gangsters, enraged slum dwellers fighting to be freed of both, they take their beatings, absorb brass knuckles and bullets, machetes and Molotov cocktails, and refuse to die.

“Adrenalin” pulls them out of the canals where they’ve been held under water, desperation keeps them from giving up on living even as their punches lose their punch and their bodies reach their limit.

The over-long and slow-starting action picture is sort of a Filipino version of “The Raid: Redemption” where the setting is a vast slum and there is no damned redemption.

Set to the beat of the “chick chick chick” of knives jabbing into flesh, it’s a movie where you take the good — long tracking shots through multi-levels of almost non-stop video-game styled mayhem, brutal fights that are more realistic than cinematic — with the half-hearted.

Many a “stage punch” gives itself away, vast volleys of ammunition are expended, but the gunfire isn’t resonant or explosive. And in close quarters, firearms are fired at the ground (no sense injuring actors jammed together in the frame).

Writer-director Erik Matti has made a Duterte era epic of blood and cynicism, a picture that where we’re given heroes but told, scene after scene, not to trust them. And above all, don’t get too attached to anybody.

Manigan (Anne Curtis) is a P-DEA cop training to join a new squad. Her old one? Wiped out. It’s made her cynical, untrusting.

“People DIE following orders, too!” she tells her boss (in Filipino, with English subtitles).

This we figure is foreshadowing that will serve her well when her new squad follows a blunt detective (Lao Rodriguez) into the rabbit warrens of Gracia di Maria, in the brutally tough Tondo section of Manila.

They’ve got a “rabbit,” a drug dealer they’re using as bait to get to Mr. Big — “Biggie Chen.” Just another bust in the country’s ever-evolving, ever-lasting drug war.

But as they wade into the maze of shanties, shacks, food stands and funeral parlors — even a packing crate “club” — of the slum, they fall into a trap.

No cell service, no “back-up,” just a dozen or so officers scrambling to escape underboss Chongki’s (Levi Ignacio) minions, and the equally enraged locals, who just want to be “left alone.” 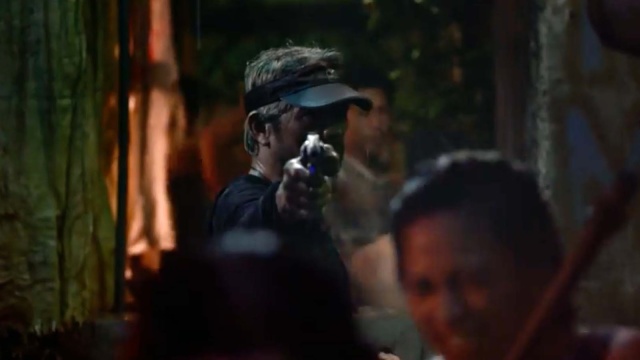 Matti drops his outgunned and overwhelmed cops into a world of clutter and cover, but no safety. Rickety walls made of cloth, no door that could stop a bullet or a mob pushing to get through it, no wall thick enough to provide protection and no help on the way.

There’s a “Judas” in their midst, and a limited supply of ammo. Fights start as shootouts and devolve into swarming brawls, sometimes with meth’d up and armed gangsters, sometimes with the skinny, over-matched but frenzied poor.

The plot is “Who gets it next?” and who will survive the night, standard action beats seen in Westerns, “Zulu,” “Assault on Precinct 13,” scads of films.

The dialogue (smartly subtitled in yellow) is generic, be the line in English, Filipino/Spanish or a patois blended from all three.

Matti packs his police squad with a cross-section of life — a married couple dealing with phone calls from annoying children, cowboys, jaded veterans — all of whom pray the rosary, aloud, on their way to the mission.

I kept looking for signs of fascist art influence on the picture — that glorification of the muscular body, The State, the military institutions, uniforms, common since “Triumph of the Will,” even evident in “300.” But this is a Filipino picture politically in marked contrast with The State.

It’s entirely too long, with pacing issues in the opening and popping up here and there as it progresses. And not every fight is convincing, the action choreography is constrained by the setting.

But “BuyBust” is brimming with life, furiously protected and furiously taken, a bracing introduction of Matti and Filipino cinema to the world.

1 Response to Movie Review: Filipino Cops fight their way out of a trap in “BuyBust”