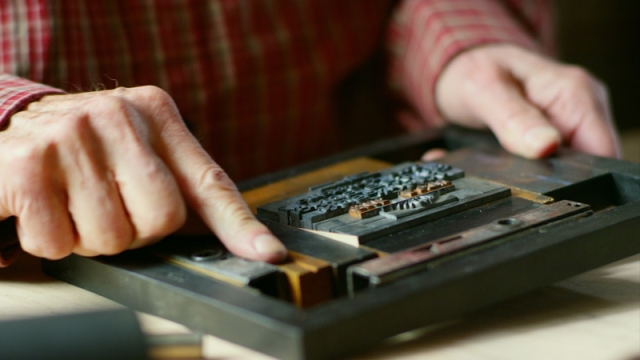 The word “artisanal” has returned to common use.

“Slow food” is totally a thing. Cameras that take pictures on celluloid, music preserved on vinyl discs, “hand-crafted” and “hand-made” are valued now like they haven’t been in years.

Might letterpress printing, the sort of technology that Mark Twain, Benjamin Franklin, even Johannes Gutenberg recognized and dabbled in, be ready for its comeback?

“Pressing On: The Letterpress Film” is a sentimental exercise in print nostalgia, a documentary that tracks down those intrepid hold-outs, still printing in the pre-computer, pre-offset styles, with letters and images molded out of lead or carved out of wood, printed on machines built to last forever, printing the oldest of “old fashioned” ways.

Most are old men like Dave Churchman and Jim Aiken, and many, the film suggests, are hoarding typeface collections, restoring relics from an obsolete technology and holding onto them in rural West Virginia, Iowa, Indiana and Wisconsin.

Then there are the new converts — graphic designer Stephanie Carpenter, Tammy and Adam Winn, who have collected a score of presses of many different sizes where they whip up posters and collectible printwork in their spare time, selling it at flea markets and farmer’s markets on the weekend. 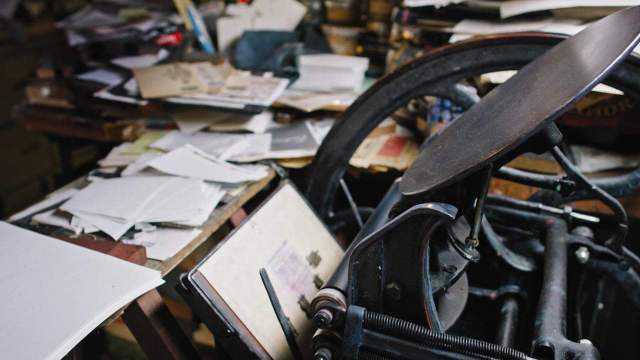 The true believers marvel at the sturdiness of the machines, of how scratched and dented lead type letters give “authentic, hand-crafted” sheen to posters, cards, a quality a big portion of the public loves and values.

The veterans of the trade show off their scars — missing fingers, etc. — from this pre-OSHA industry, which was unforgiving of any distraction and prone to typographical errors by the bushel-basketful in the days before “spell-check.”

And young people diving into it revel in the tactile nature of the work, the handcrafted care that goes into making letters, carving art print plates and assembling into them timeless designs of concert and circus posters, revival meeting notices and the like.

A standout location — Hatch Show Print, the Nashville shop established in the 1870s that went from making minstrel show posters to documenting the rise of country music and the birth of rock’n roll, just through artist’s orders as they left on tour, and their distinct, eye-grabbing style.

Using AFL-CIO vocational films of the ’40s, recreations for flashbacks and lots of expert interviews with hobbyists, retired printers and new enthusiasts, Beckloff and Quinn have assembled one of those films that you stumble across at a film festival or on public or cable TV.

It tells you more than you need to know about something you didn’t know about or even have a desire to know about, and makes you feel richer for having stuck with it.