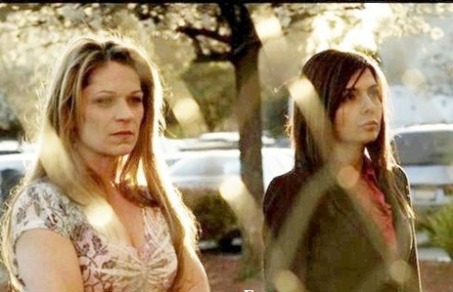 Two mothers, grieving over their dead teenage sons, bond and then begin to wonder if the other’s son wasn’t responsible for their child’s death in “Torn,” a modest, emotionally lacking melodrama built around big themes and hot button issues.
Mahnoor Baloch is Maryam, Pakistani by birth, American by choice. She and her husband Ali (Faran Tahir of “Star Trek” and “Elysium”) have plunged into the American dream. He runs a Pakistani restaurant, she’s a real estate agent. They’re renovating their suburban California split-level and planning for the future.
But a message on their answering machine — “I’m going over to the mall” — upends their world completely. They think nothing of son Walter’s words until they turn on the TV news. The mall’s food court has blown up.
In the quietly heartbreaking aftermath of police coming to deliver the awful news, Walter’s name added to an impromptu shrine of flowers and photos at the mall, Maryam meets Lea Peltier (Dendrie Taylor of “Sons of Anarchy”). A brittle, working class single mom who has lost her music-loving son Eddie, she reaches out to the Pakistani woman.
Until the cops step in. John Heard plays the police inspector who first casts doubt on the “gas leak” theory of what happened. He plows through Lea Peltier’s snappish, profane protests.
“Mrs. Peltier, I’ve got a bomb and I’ve got a Pakistani kid.” His suspicions turn into hers, and before all is said and done, the accusations have flown back and forth, religious fanaticism, Islamic and Christian, have come into play and the mystery has deepened even as the repercussions of such accusations fall upon the two mothers.
Baloch so internalizes Maryam’s emotions that she robs the character of empathy, perhaps by design. “They,” after all, are different from “us.” Taylor gives away a flash of guilt here, a crippled by grief glance there.
But “Torn” never rises above emotionally lukewarm. The melodramatic touches include a finale that purports to solve the mystery, when really — that mystery, not knowing which scenario, which kid was more troubled than we realize,  — is the best thing “Torn” has going for it.
Director Jeremiah Birnbaum’s best-conceived scenes are the quietest — police cars, silently pulling up in front of the house with unspoken news that is every parent’s worst nightmare.
This culture-clash/mother bonding story was never going to be “Frozen River,” but you do sense that a lot of potential was squandered in denying these mothers big moments of mourning, bigger confrontations with the fathers (Patrick St. Esprit plays Eddie’s dad) of their sons.
That makes “Torn” entirely too muted, muffled and watered down to deliver insights or emotional payoffs.