Movie Review: Emmerich takes terrorism WAY over the top with “White House Down”

If you see just one terrorists-take-over-the-White-House thriller this year, make it “White House Down.” But even if you saw the dour and bloody “Olympus Has Fallen,” which has a LOT in common with “White House Down,” you owe it to yourself to check out Roland “2012” Emmerich’s preachy, goofy, over-the-top take on “Die Hard at 1600 Pennsylvania Avenue.”
From the earnest but earnestly funny president in jeopardy (Jamie Foxx) who doesn’t like bad guys yanking on his sneakers (“Take your hands OFF my Jordans!”) to the eye-rolling image of a child having a “Les Miz” big-flag-on-the-barricades moment, “White House Down” is a corker, real competition for “Fast & Furious 6” as the dumbest fun you’ll have at the movies this summer.
Channing Tatum is Cale, the war vet/D.C. cop who can’t convince Maggie Gyllenhaal to let him in the Secret Service. Cale has to content himself with guarding the Speaker of the House (Richard Jenkins) and calling in favors to get his daughter (Joey King) a White House tour.
Then we see who Emmerich cast as the head of the White House Secret Service detail — James Woods. There’s “on the nose” casting, and then there’s casting Woods as a potentially volatile villain — TOO on the nose.
We go through the same “Olympus has Fallen” hyper-professional mercenary assault on the various security agencies that allows bad guys to crash into the White House. And we see Cale, the guy not good enough to get into the Secret Service, charge to the rescue — of his daughter, the president and the world.
These terrorists, who never miss until they start shooting at Cale, are glib.
“You just killed the Secretary of Defense!”
“Well, he wasn’t doing a very good job.”
The president isn’t always helpful, such as when he and Cale are searching for weapons.
“There’s some knives in the kitchen.
“Great. You can make me a sandwich.”
Nicolas Wright plays a scene-stealing White House tour guide who sometimes interrupts the mayhem to share a little White House lore, or lecture the bad guys on the priceless artifacts they’re wrecking. Emmerich makes sure there’s an “Independence Day” joke, and if that’s too subtle, he blows up the Capital. Shared plot aside, “White House Down” does stuff “Olympus Has Fallen” couldn’t afford to.
All of which undercuts the script’s lectures about the “military industrial complex,” the militia movement, the turf wars over presidential succession and the like.
Whatever messages they want to shoehorn in tumble aside in a blizzard of bullets, bombs, missiles and jokes. This is a popcorn movie, with an adequate hero, a comical presidential sidekick, a passable villain and too many deadlines, plotlines and punchlines to ever allow it to turn giddy.
But at least they were going for giddy. As “Olympus” taught us, playing this sort of assault with a straight face is downright dispiriting. You kind of need terrorists offering their buzzcut leader a slice of his retirement cake to set the tone.
“No, I don’t want cake! I’m diabetic!” 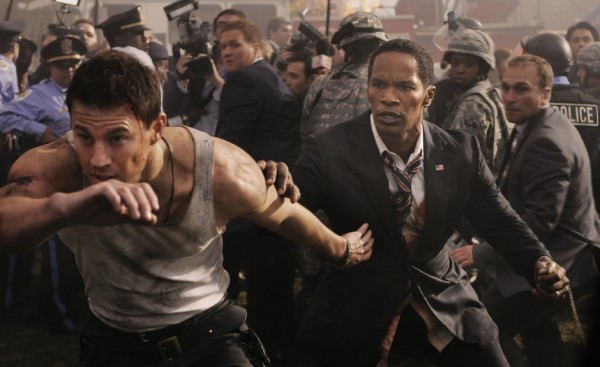