Posted on February 27, 2013 by rogerinorlando

One thing this current run of blockbuster fairy tales inspired by Tim Burton’s “Alice in Wonderland” has taught us is how very hard it is to be Tim Burton. Multiple versions of “Snow White,” a comic spatter film “Hansel & Gretel,” some have attempted Burton’s visual whimsy, all have failed to find his tone.

Bryan “X-Men/Valkyrie/Usual Suspects” Singer takes his shot with “Jack the Giant Slayer,” a genial, watchable and somewhat violent version of “Jack and the Beanstalk” that lacks much in the way of magic, romance or wit.

The best two jokes are in the opening credits, with Singer’s “Usual Suspects” inspired production company logo rendered into a police lineup – of giants – and at the final curtain, suggesting the story’s connection to modern “Englishmen” whose blood those rhyming giants smell after they’ve started their “Fee, Fie, Foe” and “Fum.” 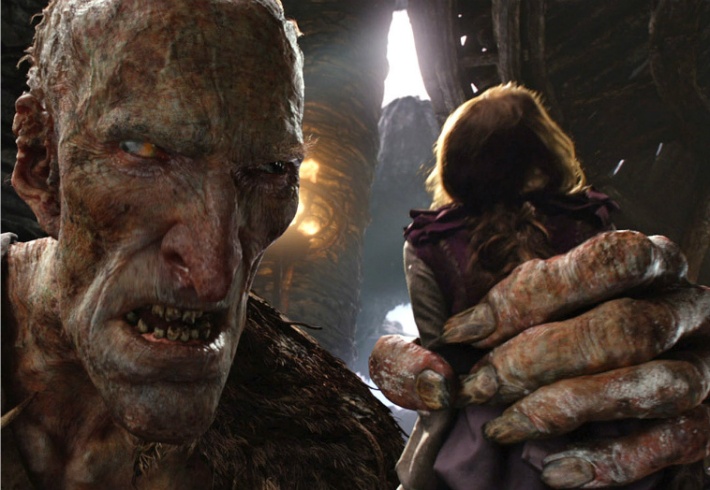 Notice I said “giants.” As in legions of them. The familiar tale of the farmboy who loses the family horse (in this case) for a bag of magic beans, the towering stalk that reaches into the heavens and a giant’s lair, the magic harp, goose that lays golden eggs, etc., has been given a video game framework here.

The boy (Nicholas Hoult of “Warm Bodies”) is still gullible. He still finds the beans. But there’s a spirited princess (Eleanor Tomlinson, who was in “Alice in Wonderland”) who needs rescuing, a power-mad Lord High Constable (Stanley Tucci) to foil, a soldier (Ewan McGregor) to befriend and all those giants to slay.

It’s “The Princess Bride” without the laughs.

A charming prologue has young Jack and young Isabel hearing the rhyming legend of the land of giants from their respective parents.

Ten years later, Jack’s injunction to “take responsibility” is ignored when he loses the farm horse to a monk with a mission – to get those magic beans to a safe place. Accidents happen, the stalk grows, taking the princess skyward with it. The king (Ian McShane, in a silly suit of armor) is at a loss. He sends an expedition up the stalk to find her.

That’s where Jack meets Elmont, the dashing captain of the guards given a World War II, “Tally ho” fighter pilot’s swagger by McGregor. Pity about the haircut.

And that’s where Jack runs afoul of the scheming Roderick, given a mildly malevolent glee by Tucci. The moment he flashes that gap between his teeth, older movie fans will see who he’s going for, an old school Terry-Thomas style “rotter,” somebody the giants can “deal” with.

“It looks like mankind is OFF the menu this evening!”

There are moments of “Shrek-like” playfulness in the carnival set up at the base of the stalk as our heroes and villains climb it. But the vast array of writers (Christopher McQuarrie among them) can’t find anything funny for McShane to do or say. And the hilarious Bill Nighy is lost inside an expensively animated two-headed behemoth.

Which is the lot of the film as well. For all Singer’s expertise at making the fantastic real, all we’re left with here is an expensive-looking bauble – worth looking over, but not really anything to treasure.