With studios rushing to pull everything they have a prayer of making a buck off of from their release slate, it’s the perfect time to catch up on movies that remain in theaters because…they have nothing else to show and lure filmgoers with until that day when the cinemas themselves are closed.

I’ve never paused more than a few minutes whenever I’ve channel surfed by “Impractical Jokers,” the long-running truTV series about four Staten Island pals who play pranks on each other in front of unsuspecting members of the public.

A little too “Jersey Shore” for my taste. And I’ve an irrational dislike of people who laugh too hard at their own jokes — this or that “morning zoo” on the radio, Jimmy Fallon, and dese guys.

So yeah, expectations were low, going in. And while I wouldn’t necessarily suggest you pay first-run prices to see “Impractical Jokers: The Movie” — it’s more Netflixable — the guys did tickle me, against my will, a few times.

The set-up begins in 1994, when the guys — in wigs meant to convey how they looked in high school — crash a Paula Abdul concert using the old “Yellow Jackey with ‘Security’ written on the back” prank. They make pigs of themselves in the green room, and a mockery of the concert.

First laugh in the movie? The real Paula Abdul CLOTHESLINING one of the lads.

Cut to years later, they’re TV famous, and they run into Paula A again — who only knows them from their TV antics. Yeah, it’s in a Red Lobster, so it TOTALLY could happen. She invites them to a party in Miami and they resolve to make good on this debacle from their past (she doesn’t know they were concert-killers) by road-tripping in the car they cruised in, back in the day, the Ford “Crown Vic” that Q (Brian Quinn) has mothballed in his folks’ garage.

Joe Gatto, James “Murr” Murray and Sal Volcano are down. But Paula’s only left them three passes for the party. The guys will compete in pranks all the way from Staten Island to Miami. Loser loses out.

Their MO — they wear earpieces and “force” the “joker” sent out to pretend to need car trouble, give a really bad eulogy or convince fellow passengers on a tour boat to NOT “rescue” a stranded serviceman in a dinghy to say every obnoxious, embarrassing thing that pops into their heads as they stand, backstage as it were — stage-managing the “joke” and howling their heads off with laughter as they do.

It’s hit-or-miss by design, and sometimes the misses — the car trouble stunt devolves into a game of hide and seek with a helpful motorist — can be funny, too. 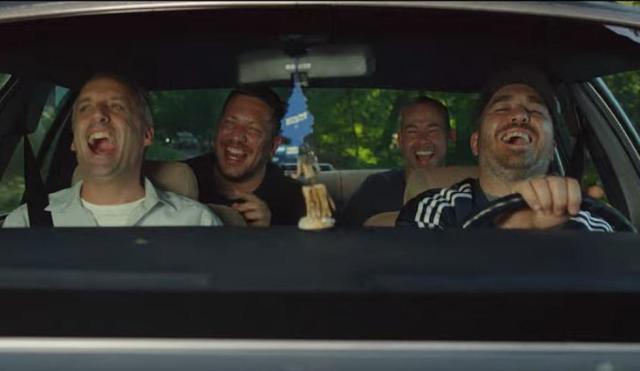 The script here is pure junk, running gags about balding Murr’s secret hotel “party” life and the like. But there’s geographic whimsy in putting these four on the road, the only Yankees dumb enough to stop at “South of the Border” where they saddle the “always late” Q with alternative transportation by taking off with the car. He has to ride a horse down the roadside to SOBorder dressed as a Roman — “SAD-iator,” one wag calls him.

The DC stop isn’t much (a Lincoln Memorial reflecting pool “eulogy” gag that never works), but just south of there — either at Luray or Dixie Caverns in Virginia (just guessing here) — they dress up Joe as a Mole Man who got separated from his “tour” and stumbles into a new bunch of underground tourists.

The guys play up their “mook” image when they hit at Atlanta strip club, and they do no pranks in Florida, damn them anyway.

But here’s the gem mixed in with all that cubic zirconia. They take turns coaching (via that earpiece) each other through the most DISASTROUS “job interviews” with assorted members of the security and facilities staff of the Atlanta Hawks hoops team.

“Immediately launch into ‘Why the Earth is flat’ instructions, or “You answer the questions WE ask you, NOT the ones from the job interviewer.”

This is one stunt that resonates. We. Have. All. Been. There. Their improvisations are convincingly daft. And their assorted humiliations, the “roll with it” confusion or dismay of those interviewing them, is the funniest thing I’ve ever seen them do.

Granted, again, I’m not an expert on these “Jokers.” But this one bit makes “Impractical Jokers” worth checking out in movie form — in a “dollar” theater, or on Netflix anyway.