Book Review — “Funny Man: Mel Brooks” gets at the wit and the warts of the legendary comic, playwright and filmmaker

Posted on September 30, 2019 by rogerinorlando

It’s no secret that many of the great comics are and were never the most pleasant people to deal with.

I remember a confab of critics I was part of in a hotel bar in LA one time when we started swapping notes on “the worst” interviews we’d ever been a part of. “Early Jerry Seinfeld,” before the vast wealth, before the mellower years AFTER “Seinfeld,” was hands-down the consensus winner.

And that was before I tracked down Jackie Mason for a phoner. Rude, bitter and a bigot, to boot. 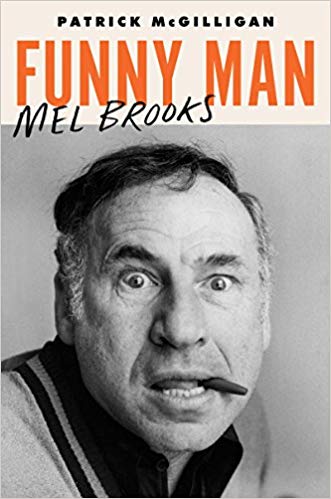 Arrogant, ill-tempered, a “credit thief” without peer, brown nose, “serial cheater” and “deadbeat dad” are the descriptions that make one flinch in the book. Yeah, he’s lovable and now in his ’90s, but maybe the anecdotes and spin that he’s woven into his life story are largely bunk.

Or at least exaggerated.

He got his big break by becoming Sid Caesar’s clingiest acolyte, paid to be a sidekick and eventually Sid’s personal writer even though he regarded many “real” comedy writers as “typists.” He was a “talking writer,” his colleagues (Carl Reiner is the most charitable) suggest, antic while bouncing off the walls of the writer’s room, grabbing others’ ideas and pitches as his own by attempting to “top” them. Couldn’t be troubled to write them down. He was too busy kissing Caesar’s behind.

Sometimes he did top them. A lot of times, he just collected more than his share of credit for the funniest bits. This became his MO throughout his career — cheating other writers out of credits.

But he learned the business on those early TV shows, transitioned to theater, where he failed several times, failed and failed again in Hollywood before he finally created his own breaks and uh, learned to TYPE.

The portrait of Brooks that emerged from the movie “My Favorite Year” and the Neil Simon play “Laughter on the 23rd Floor” was entirely too sweet, naive and charitable, in other words.

He paid his penance, though. He “wrote” for Jerry Lewis. Briefly. Got a taste of what somebody like the man he was then was to deal with from the other side of the equation.

One of Brooks’ biggest breaks was his “2000 Year Old Man” shtick, born as an impromptu party routine with lifelong pal Carl Reiner (check out the “Comedians in Cars Getting Coffee” with Brooks and Reiner. Still going.).

That led to sequel LPs that kept him going before his TV and film career and all that followed blew up.

And more directly, it led to his share of the credit for an Ernest Pintoff Academy Award winning short film. This 1963 short is still the funniest embodiment of “Everybody’s a critic” I’ve ever seen, shown on art film cinema screens for years and underscoring Brooks’ lifelong antipathy for critics — TV, theater and film.

He basically improvised the material, did a couple of takes of “watching” the “art film” depicted, and they edited together his funniest responses.

McGilligan points to the role Johnny Carson, a contemporary of Mel’s and a huge fan, played in making the behind-the-scenes “talking writer” famous for being funny before he got Get Smart” (written with Buck Henry, with Brooks taking more of the credit than he deserved), and then his long-dreamed-of “Springtime for Hitler” (the working title) film, “The Producers,” was financed, produced and directed by tantrum tossing Mel.

Carson gets “The Tonight Show,” the unknown Brooks becomes a favorite guest. That helped keep his name out there, his antic funnyman image in the public eye, until his big “Producers” break.

After those breakthroughs, as McGilligan notes, Brooks leaned on all those Sid Caesar shows and their 1950s writers’ room creations — movie parodies, silent film sendups — to become the King of Comedy in the 1970s.

When he ran out of those recycled ideas, including recycling a “Robin Hood” parody for TV, Brooks was lost. A remake (“To Be or Not to Be”) looked like his last hurrah.

Until taking “The Producers” to Broadway made him the grand old man of the theater he’d long wanted to be.

McGulligan has books about Clint and Jack Nicholson, the Hollywood Black List and Hitchcock under his belt. So he’s used to doing research without actually interviewing the book’s subject. Mel’s spun his image so well and so long, that distance certainly helped here.

“Funny Man” (Thorndike Press) is good book, an easy read that is well researched and annotated, and one that benefits from not having extensive Brooks cooperation and “control.” He didn’t kvetch his way out of this one.