Posted on September 11, 2019 by rogerinorlando 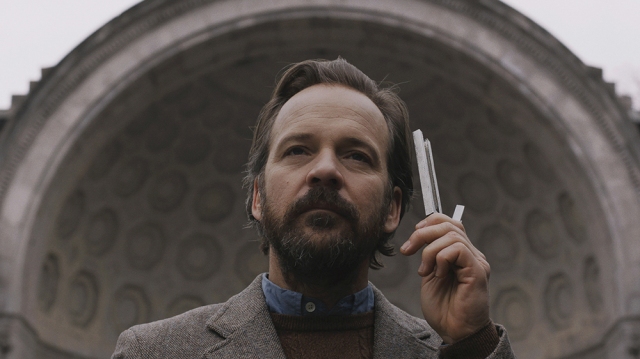 She is haggard, as something in her life, this city or her apartment is keeping her awake at night.

He meets her, inscrutably scrutinizes her apartment as he walks from room to room. He listens.

It is. And that’s where the “house tuner” reaches his conclusion. His diagnosis?

“I think you need a new toaster. That should do it.”

She’s mildly flabbergasted. That’s IT? But he’s certain, something to do with a minor chord the toaster resonates at clashing with her fridge’s motor hum.

“I’ll have a new model sent over soon.”

The first seventeen minutes of “The Sound of Silence” plays like the best short film in many a year. It’s compact, provocative and thanks to the serenity of its star, Peter Sarsgaard, and fraught exhaustion of the client (Rashida Jones), draws us in pretty much instantly. It leaves us with a sense of whimsy unexplained — mystery.

It’s so good you figure out “The Sound of Silence” was a short film before reading that in the credits. Alas, not every short film can sustain its interest when the mystery is unraveled, when the characters, story and back story are augmented to feature film length.

“Before I Disappear” is one recent example of a short turned into a winning feature.  “Silence” isn’t on a par with that, but compelling performances and an unbroken tone established by the acting, the sound design and a dimly-lit production design make this eccentric indie drama worth your while.

Peter Lucian has been studying New York City’s sound for years, covering neighborhoods, breaking out a tuning fork or two — or three — finding the pitch, the chord, the equivalent musical note for the sonic nature of that corner of town.

He takes meticulous notes, by hand and old analog microcassette recorder. He keeps a vast hand-notated map detailing his findings. He has an academic mentor (Austin Pendleton) who might help him get his “G Major Theory” published.

But that’s his passion. His vocation is consulting on what ails people’s lives, tonically and sonically. It might be a couple that’s worried about the stress their relationship is undergoing, a newcomer to the city wanting “soundproofing” or, as with Ellen (Jones), somebody who isn’t sure why they’re not sleeping.

Word of mouth recommendations are his lifeblood in a city where faddish cures, “readings” and treatments are worn like status symbols, something you know that your circle of friends have never heard of.

Lucian has even been profiled in The New Yorker’s quirky “Talk of the Town” life-in-this-city column.

Sarsgaard suggests preternatural calm as this lone prophet of sonic sanity in the cacaphony of the Big Apple. He is a professional with the resolute confidence of a man who knows what he’s about. And the messages clients leave on his answering machine bear out his unerring ear, and his success rate.

The movie, of course, is about the woman who becomes his greatest challenge. She is recently single, 40ish, works for a non profit helping the homeless. And his “toaster” prescription doesn’t do the trick.

He can talk about “foundation notes” and the “tonic” landscape surrounding her, the notion of “oppressive chords” and the “electrical silence” of a building that’s been perfectly grounded (as any recording studio or radio engineer about that).

She’s still not sleeping. And she’s throwing his game off. His mojo has fled.

“This is about universal constants, not commerce.”

And Ellen is curious, maybe even attracted to this soft-spoken oddball who cannot, for the life of him, find a simple sonic solution to what airs her. Whatever she has, it’s contagious, and it derails his equilibrium.

None of these plot embellishments does much to extend or heighten our enjoyment of “The Sound of Silence.” Sarsgaard gives the fictional Peter a nice downward spiral, retreating into himself, lashing out, grasping for whatever it was that her troubling case (her office makes him fumble for sound-canceling earbuds) took away from him.

Jones has less to play around with, a bigger leap to make. Awkward on-the-spectrum types like this chap are catnip to the opposite sex ONLY in the movies. “Silence” needed more scenes with her and about her, less of Peter’s rising paranoia about his “discovery” and those who might steal it.

But we still have two empathetic actors playing compelling characters to latch onto. And we still have that perfect short film that is never completely subsumed in the “noise” that fleshing out this charming, autumnal tale of loneliness, sleeplessness, sounds and silences in the big city gives us.