The cinematic equivalent of Monty Python’s “The Cheese Shop” sketch, “Dragon Kingdom” proves that the Jolly Oldies never get over their love of curdled, cured milk.

It’s a “Lord of the Rings Lite” lark, the sort of film a bunch of film professionals might fling together in their spare time, with borrowed historic settings, vinyl and leather remainders from a shoe factory and all the makeup they can cadge from work.

Digital effects? It has dragons, passably animated ones, with incompetent dragon’s shadows painting in on sunny days.

It’s go a stone ogre and goblins or “Orcs” as J.R.R. used to call them, a cloven-hoofed ram-man and lizard people and Amazons, called Qatori, here.

A veritable “Army of Abominations,” they’re named. Because they are.

And that’s nothing to the zombies, called “Furies,” that the foppish evil prince (Jon-Paul Gates) uses to stage his coup to try and seize the “Twelve Kingdoms of Azeroth!”

A smattering of punchy banter — not nearly enough  — dresses up the dialogue.

Mostly though, what this no-budget action fantasy has, is good old British cheese — Cheshire to Wensleydale, Red Leicester to Teviotdale, and yes, I am using Wikipedia as my cheese thesaurus, because that’s allowed.

“Trampled by the dark army of Fury” begins the most exposition-heavy opening to a sword-and-sorcery epic since “Lord of the Rings: Return of the King.”

It’s not really about dragons. I think an earlier title was “Dark Kingdom.” They just thought “Dragon” would sell this thing.

The Princess of Zaldar, and yeah, I’m just making up the spelling of what I heard,  and her entourage make their getaway with a dragon’s egg. But like the dragons of the title, that’s a red herring.

The movie is REALLY about their attempts to reach the king via the Dark Kingdom.

That’s where the haunted forest where the days are a trial and the knights are tested, the Qatori show their stuff and the princess can complain “But I want to learn to fight!”

I got a kick out of the period-appropriate historic village the film opens in, largely built from (plainly visible) mass production two by fours and the machine-milled lumber.

The assorted enemies in need of slaughtering have magical qualities, and really bad allergies. The zombies gurgle, perhaps a reaction to the burlap sack costumes they show up in.

“Can weapons not harm them?”

“Let’s cut off their heads and be done with it!” 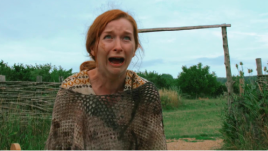 All this nonsense drifts into caves where there’s much hand-to-hand/ hand-to-claw combat.

And they top it all off by leaving things unresolved, in a Tolkien-esque sense.

Yes, there’ll always be an England and there’s always hope for a sequel.

Just don’t forget the cheese, and none of this “We’re fresh out” nonsense either.