Movie Review: “Last Call” reminds us to be careful when we dial 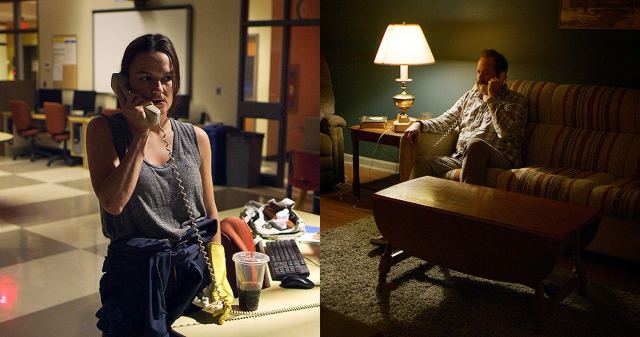 Two basic concepts separate the cinema from the theatrical stage.

In movies, filmed video storytelling, the filmmaker decides where the viewer’s focus MUST be. In theater, the viewer gets to make that choice. This actor, or that one, or that bit player having a little fun upstaging the leads, all can draw the eye and, if the director allows it, compete for the viewer’s attention.

And film, unlike most art forms, features utter mastery of time and space. Your locations are limited only by the filmmaker’s imagination. The ability to skip easily back and forth in time is also boundless, thanks to editing.

In the theater? Not so much.

“Last Call” is in indie drama about a suicidal alcoholic who gets a wrong number when trying to reach a help/hotline. The after-hours custodian who answers finds herself inconvenienced, then trapped, then involved and finally committed to this call that may be a despairing man’s last lifeline.

It’s an inherently dramatic situation, with rising suspense, built-in pathos and the “ticking clock” countdown that all good thrillers lean on. It’s also stagey, “theatrical.” It could be dramatized with a stage, two actors, two pools of light and two prop phones. Simple.

Director/co-writer Gavin Michael Booth decided to jazz up that simple set-up in two ways. He shot his two actors — his wife Sarah Booth plays Beth, the working-mom/custodian, co-writer Daved Wilkins is Scott, the drunk on what might be he last bender — in two locations, and in real time. Their separate performances are contained in one, long take.

And he shows them both, all 70-odd minutes worth, on the screen at the same time — split screen.

That tosses “Last Call” into the category of novelty films, stunts.  Like Hitchcock in “Rope,” he’s leaning on the “long take,” which can be inherently suspenseful as the viewer is conditioned to expect edits, changes in points of view, etc., and the filmmaker isn’t providing any of those.

With split screen, like DePalma impersonating Hitchcock in “Dressed to Kill,” and many other examples of that camera trick (“More American Graffiti,” “The Thomas Crown Affair,” “Grand Prix,” etc.),  he’s forcing the viewer to decide on what to focus on.

We watch the barfly buy a bottle for the walk home as his favorite watering hole closes for the night. And we see the custodian, a student and single mom, running through phone numbers, trying to pinpoint why her older son hasn’t made it to the sitter’s yet.

Beth starts her nightly cleaning routine at the college, Scott drunk-dials (on a rotary phone) the wrong number, and their night — connected by phone — begins.

Scott talks in a slightly-slurred monotone, so much so that it’s a wonder Beth doesn’t dismiss him in a flash. They talk at cross purposes just long enough to establish that he doesn’t realize he’s not called the right number, and long enough for her to realize who he’s trying to reach. Not at first, though.

“What if people call?”

Beth multi-tasks the way single moms do, distracted, trying not to be rude. And then Scott stumbles across the words that keep her from hanging up.

We know where this will go from that moment onward, with just a couple of possible twists crossing our minds as we do the math.

Does seeing all the action play out, on two halves of the screen and in real time, distract us enough to give the movie mystery and added suspense?

No. “Last Call” is enlivened considerably by Booth’s increasingly engaged and emotional performance. She will punch you in the heart before the film is finished.

This slight thriller doesn’t really suffer from its gimmicks. It’s just that director Booth learns what generations of filmmakers figured out before him, some of them masters of the medium. Every movie isn’t made this way because it’s anti-cinematic, as Hitch put it.

Editing, “montage,” is “the essence of cinema,” “The Master of Suspense” realized. Cutting, changing points of view, moving in tight on this actor or that prop, builds empathy and suspense. The speed of edits literally quickens the pulse (See a “Bourne” movie, any “Bourne” movie).

Take that away, force us to choose which character we’re going to focus on, and the gimmicks become pace-killing distractions.

The forlorn (and increasingly insistent) music by Adrian Ellis, a script that takes Beth from dismissive to too-obviously indulgent and “humoring,” and then to concerned, dialogue with flinty lines like “That’s the thing no one tells you about ‘rock bottom’ — it doesn’t exist” work with or without split screen.

They work a little less well when we can choose to ignore the drunk and focus on the increasingly frantic (still multi-tasking) Beth.

Booth has come too close to creating a filmed play — enlivened by long tracking shots of Beth scampering from room to room, phone to phone — to let this work as well as its thin, generic story would let it.

It was never going to be a dazzling addition to the genre. Is it enough to be remembered for the gimmick?