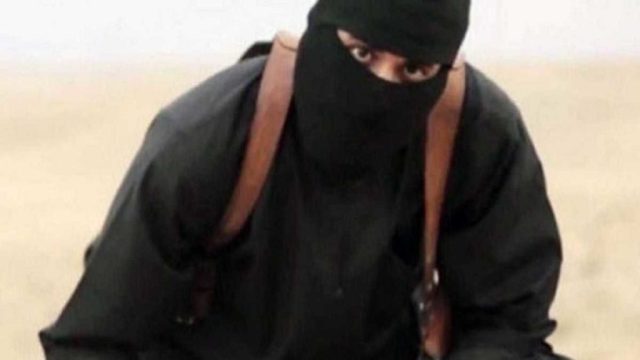 We met him on the evening news, or if we were particularly unlucky, on the Internet. A hooded terrorist with a dispassionate London accent, and a very long knife — introducing hostages to the world, getting out his ISIS message.

And then he’d use that knife, beheading his bound, helpless victims on camera after making them recite a statement renouncing whatever Western country they’d come from, many of them journalists — drawn to a part of the world in humanitarian crisis, murdered by the monsters creating it.

“Jihadi John” the global press named him, and curiosity spread far and wide as to the true identity of this well-spoken, obviously educated young man who hated like few people we’d ever seen hate before, at least on TV.

What was so chilling, says one expert interviewed in “Unmasking Jihadi John: Anatomy of a Terrorist,” was that polish, that accent. “He was from us, and knew us instinctively.”

Veteran British documentarian Anthony Wonke (“Ronaldom” “The Battle for Marjah”) tells us the story of Mohammed Emwazi from childhood through his radicalization and on to the efforts to identify him and then hunt him down.

“Unmasking” finds old school videos where a shy Kuwaiti-born British teen constantly covers his mouth because he gets teased about his breath, plays tapes of him relating his experiences with police and then the videos that made him famous — mercifully stopping short of showing the heinous crimes the world saw him commit.

It’s a movie with a legion of talking heads, a flurry of unidentified voices and faces photographed in small pools of light in a darkened studio, passing on facts, impressions, opinions and conjecture about someone they knew as a student, a quarry or — in a couple of cases — a captor.

We’re given the context, the world that the Islamic State exploded into, and reasonably detailed portraits of the braintrust that created it and saw it blow up and evolve and grow in ways they never could have imagined.

And we meet cops and intelligence officers, who started keeping an eye on this fellow after he began the process of changing from a college kid who loved Manchester United, partying, booze and weed into a radicalized Muslim, recruited by online videos and by charismatic peers — given purpose, the sense of the larger-than-himself cause in the various humanitarian disasters in the roiled Islamic Middle East by this new passion in his life. 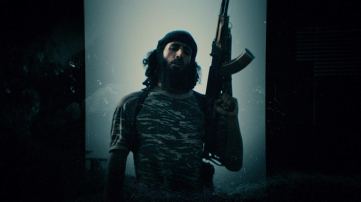 He did the things one did to fall under police suspicion — traveling to hot spots in the region — and bristled when intelligence officers brought him in for questioning.

The film shows some of those officers wondering aloud what they could have done differently. No doubt interrogations in Tanzania and elsewhere weren’t as civil rights-conscious as the ones Emwazi was subjected to in Amsterdam or London.

Did they want to scare him out of making the leap? They certainly wanted him to inform on others whom he knew were already raising money for terrorist groups, making overseas trips and allying with radicals at home and abroad.

It’s a fascinating overview, with sociologists and military leaders, American and British, onetime radicals (heard, not seen) relating their experiences in that world, relatives of those murdered in those infamous videos, survivors of Emwazi’s captivity all pitching in to paint the picture.

I could have done with, you know, a few of them being named with on-screen titles, explaining their connection/expertise, etc. I’m watching the movie differently from the average viewer, but I dare say we’d all like to know how much credibility to give to those telling us the story. It renders the film’s soundtrack into something of a vocal drone, overloading us with data.

And truth be told, “unmasked” or not, there’s no real explanation for why he turned out the way he did. Leaving parents and others who were closest out — they probably didn’t want to talk — leaves us with the same mystery that the film opens with.

That doesn’t utterly ruin “Unmasking Jihadi John’s” impact, which is chilling in the ways it recalls how truly barbaric ISIS was at its peak, the shock that hit us all when this “Medieval” group — which murdered prisoners and enslaved women –burst on the scene.

And as interesting as the sketchy early life might have been, seeing who this fellow was to those who can talk about those years (a few white Brits, not his family or peers), the film works best in the tense third act. That’s when Emwazi is identified and hunted and when the film wrestles with what comes after ISIS as it fragments and scatters all over the region which most of its members came from.