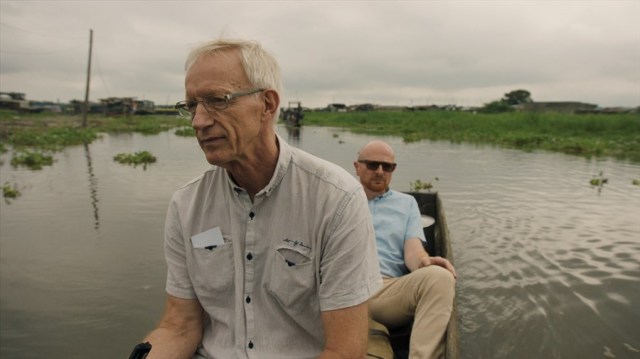 “Cold Case Hammarskjöld” is a documentary that invites the viewer down another rabbit hole with the quixotic Danish filmmaker Mads Brügger.

His “Red Chapel” was a playful plunge behind the bamboo curtain in North Korea, with Brügger and an accomplice posing as two Danish comedians on a cultural exchange mission, rooking the Koreans into letting them see what their isolated, repressive state was really like.

Here, Brügger plays an investigative journalist. He tags along for six years in the quest of an amateur sleuth as they try to discover what really happened when crusading do-gooder U.N. Secretary General Dag Hammarskjöld‘s plane went down on the border of Congo and Rhodesia (now Zimbabwe) in September of 1961.

The two hour+ film Brügger carved out of this detours into vast conspiracies and stony official silences that reek of “cover-up,” of the Africa of Angola and assassination, AIDS genocide and white supremacy, Mozambique and mining corporation-backed murders — at the highest level.

Early on, he shows us the gear he and Göran Björkdahl, the son of a man who collected a piece of Hammarskjöld’s plane that he passed on to him, are packing to take to Ndola, the remote airport where Hammarskjöld’s plane crashed. Two shovels, two white pith helmets “to protect our pale Scandinavian skin” from the African sun, and two Cuban cigars for when they “celebrate” digging up the plane and finding the “smoking gun” that makes their case.

It’s not a spoiler to say Brügger lights up the cigars. What the viewer has to do is decide if this dogged but credulous and easily sidetracked filmmaker should ever have struck the match.

“I know for a fact that the villain of this story, he only wore white,” he says by way of introduction. His conceit for how he presents his evidence, how he and Björkdahl feel confident in naming names and reaching conclusions, is by telling the story of the film in two hotel rooms.

In Cape Town, South Africa and Kinshasa, Congo, the director/narrator/provocateur dresses in white to emulate “the villain” and dictates his tale to a couple of African secretaries typing on old fashioned manual typewriters.

It is either “the world’s biggest murder mystery or the world’s most idiotic conspiracy theory,” he admits, addressing them, us and the wall he’s covered with a documentary filmmakers’ friend — Post-it notes.

He uses animation to recreate the crash and scenes his assorted witnesses describe.  Brügger and Björkdahl travel over much of Southern Africa, interviewing surviving black African witnesses (who were ignored or discounted at the time), fleshing out the life’s work of Hammarskjöld, lauded as “The world’s first ‘public servant,'” at one memorial service.

Brügger notes the ways the U.N. and South Africa’s Truth and Reconciliation Commission have come out and said they’re pretty sure Hammarskjöld was assassinated. They gather names, lists, address books and documents from a shadowy enterprise called the South African Institute for Maritime Research.

And every so often, a secretary — Saphir or Kerryn — will stand up for the film and for the viewer with an interruption of this meandering, teased out tale.

“That’s a lot of names. I’m confused,” one woman will complain.

“Are you going to talk about the deeper story? About Apartheid” the South African Kerryn will ask.

At another point, Saphir leans back from the typewriter as if she’s solved a puzzle.

So that’s “why this became fiction,” she declares!

The frustrated Brügger mutters, “This is not fiction. This is a documentary

But is it? Really?

At several points, anybody with any experience of the law or journalism will see how credulous these two are in the ways they decide who is credible and who is “lying.”

Showing a key witness a hand-written “fictional” memoir by that named “villain” and saying, “This is his handwriting, right?” is laughable.

So is the lone phone chat they have with this American “Rambo” like figure who might be connected with what happened. “Go find out who killed Kennedy,” he jokes. “Do something important!”

Then there’s the Ndola airport official who says they can dig there for the buried plane wreckage. They want “all of it?”

“But…you only have two shovels!”

What isn’t funny is the fact that suddenly, permission is dig up that wreckage is yanked. It’s not funny that British Intelligence and the U.S. CIA won’t release information they have — transcripts of a fighter pilot’s chatter intercepted that night, etc.

And seeing Hammarskjöld’s bloodied body, with what looks like a playing card tucked under his collar (A CIA calling card?), recognizable when mysteriously every other body in the crash was burnt to a crisp, perhaps to hide bullet holes from a fighter jet?

The most credible witnesses who knew the Belgian mercenary fighter pilot in question, the pilot’s widow who blurts out, “Oh, not that Hammarskjöld nonsense again” when they ambush her?

Yes, we can believe that powerful people, rapacious capitalists and their Cold Warrior allies wanted this guardian of young African democracies silenced. The CIA was particularly assassination happy back then.

At some point, tumbling into the white supremacist subterfuge of Apartheid Era South Africa, Brügger loses the thread, or at least introduces too much information to himself and to the movie.

Sometimes, just a chapter heading will suffice — “Chapter XII, The Evil that White Men Do.”

In the end, perhaps it is less important that “Cold Case Hammarskjöld” finds or doesn’t find its “smoking gun,” or that it makes or doesn’t make its case beyond a reasonable doubt.

Even if he’s not a journalist — he’s playing one, much as he played a Libyan Ambassador to poke around in the “blood diamond” trade in “The Ambassador” — Brügger forces us to remember an almost-forgotten crusader and compells us to wonder just what is being kept from us by government agencies who know where the bodies are buried, and who — back then — provided the shovels.

Credits: Written and directed by Mads Brügger.  A Magnolia release.