Netflixable? Robert Patrick’s still scary after all these years in “Edge of Fear”

We all dread the idea of it, somebody like Robert Patrick breaking into the house, waving a gun around, drinking our liquor and smoking our cigars.

And FLUSH the toilet! What, were you raised in an OUThouse?

Patrick’s been one of the most reliable big screen scary guys since he broke out in one a “Terminator” sequel. Even cast as good guys, he’s the scary “good” cop, the alarming dad you don’t want to cross.

He’s used to good effect in “Edge of Fear,” a low-budget Georgia home invasion thriller quite possibly filmed for the Chinese market. It’s got a veritable rainbow of villains and a heroic Chinese couple — doctors — at its center.

We meet Laura (Zhu Zhu) and Patrick (Shen Lin) in the prologue, saving a stock broker (Rockmund Dunbar) who’s had a heart attack.

Years later, they’re visiting their friend at his cabin in the mountains when six tattooed greasy-haired and armed toughs stop in after “car trouble.”

That’s what Jack (Robert Patrick) purrs at the door. Mike (Dunbar) asks a lot of questions, doesn’t want to let Jack in. But rather than be rude in front of his guests.

Hell’s bells, Jack holds the door open and lets in his minions and his client (Robert Knepper). The house is overrun in a second, and tense minutes pass as the visitors throw their weight around — stepping on furniture, taking liberties with “I was saving those for a special occasion” cigars, throwing pottery at the fire place.

Patrick’s halting “Please…leave” isn’t going to cut it. Laura’s glowering isn’t helping. But they haven’t seen what we have. Jack’s gang freed Mexican gang leader Novak (Knepper) and wiped out an entire prison busload of convicts and prison guards to do it.

If you’re shocked that these creeps don’t just storm in and kill Mike, Laura and Patrick, so was I. But Novak, who is NOT Mexican, keeps saying “Karma” to Jack, as if their violence begets his bad fortune.

The first confrontation gets one character killed and another stabbed right in the chest. Only the stabbing doesn’t finish the job. That character awakens from the shock, and with the knife still poking out of the chest, proceeds to try and turn the tables on the villains, who are waiting for their next getaway car to show up.

The thugs call Patrick “the little Chinaman” and smirk about “Yellow Fever” (a yen for sex with Asians) with Laura. So yeah, they’re racists, too.

And Patrick is easy to under-estimate. He swooned while deer-hunting with Mike. He’s slight of build and seems to take the Hippocratic Oath way too seriously.

But sometimes, a bad guy or bad guy’s moll (Jodi Lynne O’Keefe) has it coming. 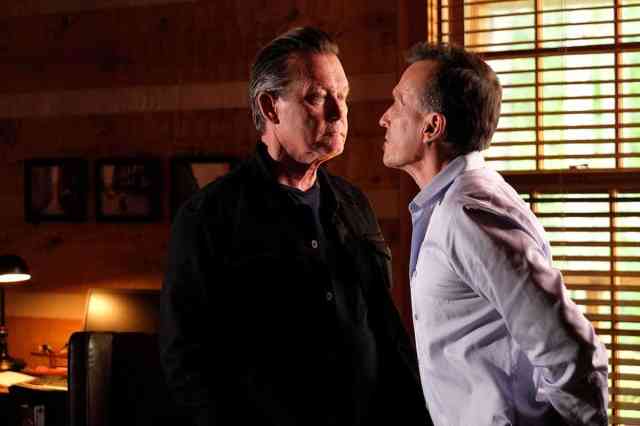 “Ten Little Indians/Die Hard” thrillers like this, in which one character picks off the others, are all about “the gag,” the inventive ways the hero/heroine finds to even the odds. Director Bobby Roth and screenwriters Scott Barkan and Gregg Zehentner cook up a few good ones, and utterly drop the ball at other points.

There’s a sex and post-coital argument bit of comic relief and gallow’s humor from the crooks, who have dumped a body elsewhere. “He’s in a better place. In the garage!”

And Patrick brings the scary with his usual aplomb.

It’s a routine thriller with a far-fetched, not-entirely medically-defensible premise (hero with knife in chest). Still, “Edge of Fear” could have been much worse than the sometimes-tense, sometimes mediocre mixed bag it turns out to be.

Thank Patrick for that. He’s the stuff of a million home-invasion nightmares.