Movie Review: Richard Dreyfuss wants to be an “Astronaut,” at HIS age?

It seems winded, right from the start.

An air of wistful melancholia hangs over “Astronaut,” and even when the scenes with potential silliness show up, you can’t help but feel the filmmakers left laughs on the table.

But, as they say, “It gets better.” The picture, about a nursing home resident trying to win a “trip to space” lottery in his dotage, changes directions, picks up speed and just a hint of urgency. Star Richard Dreyfuss gets his moments and finds a couple more of those signature, pugnacious Richard Dreyfuss lines to nail.

And the whole sentimental affair goes down easier than you might expect from that desultory opening act.

We meet Angus Stewart on a bad day, just his latest bad day since his wife died.

A doctor ticks off a list of his new meds, his various ailments (angina, etc.).

“I just moved in with my daughter,” he says.

“Keep up the good fight, Angus. Because what’s the alternative?”

They’re selling his old house, and a little-used telescope is one of the few things he fetches from it. He’ll stare at a comet, talk to his late wife and win the enthusiasm of grandson Barney (Richie Lawrence), waxing lyrical about why we look at the stars — “to see where we belong.”

When they see a tech billionaire (Colm Feore) pitch his Ventura Competition, “for someone who dares to dream big,” seeking 12 “astronaut” passengers for his new space plane, seats assigned by lottery, Barney needles Angus to take a shot.

Angus’s daughter (Krista Bridges) and son-in-law (Lyriq Bent) bicker, but only briefly, about whether he’d do better in a nursing home. He has episodes and spells. Next thing we know, he’s checked in, with a nursing home drug regimen, PA announcements, bad food and quietly complaining “inmates.”

The only one Angus can relate to is the almost-mute stroke victim, Len, played by the great Graham Greene.

You can guess what happens. Angus enters the lottery, lies a lot to get into the finals, and…

That’s where “Astronaut” turns interesting, as “our most mature contestant” reminds the world that there’s a lot of expertise that we’re shrugging off when we stop listening to our elders. 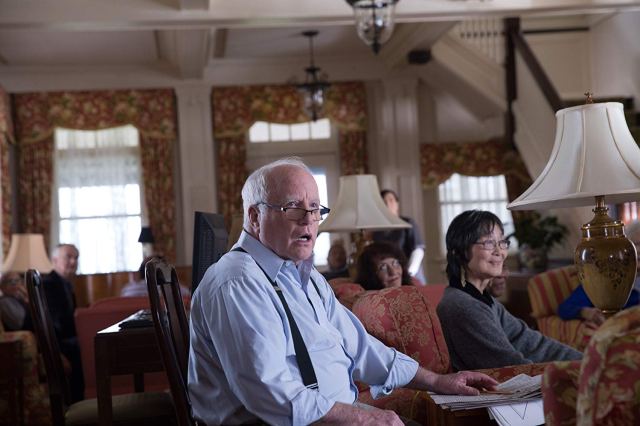 Dreyfuss summons up a little of that old Oscar winning twinkle, and Canadian actress turned writer-director Shelaugh McLeod finds sweet things to do with Angus’s late-wife’s pet project, a donkey sanctuary, even if she rarely wrings the laughs she should out of “the home.”

None of this requires heavy lifting on the audience’s part. The obstacles are both commonplace and generally under-developed. “Astronaut” so lacks an edge it feels tailor made for The Hallmark Channel, Heart TV or their Canadian equivalents.

But every now and again, Dreyfuss makes his presence felt, and the picture, like the gimmick at its heart, achieves something like liftoff. Almost.